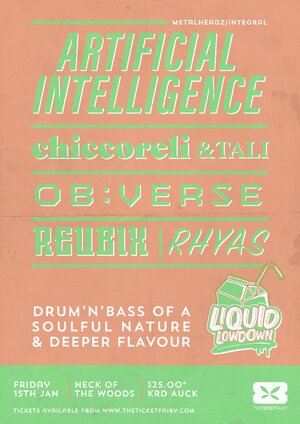 The Liquid Lowdown is back for it's first show of 2021, bringing that 'Drum & Bass of a Soulful Nature & a Deeper Flavour'

Headlining this very special show, is one of the most celebrated and recognised artists in the Drum & Bass scene -

The formidable duo comprising of Glenn Herweijer and Zula Warner have been at the forefront of the Drum & Bass scene spanning almost 20 years, with a consistent discography of legendary tunes such as “Uprising”, “Bloodlines”, “Days Of Rage” and “Pass The Buck" (feat. DRS).

It was back in 2005 with "Desperado," Warner and Herweijer first hit international acclaim; their mesmeric tune was given Radio 1’s esteemed accolade: Number 1 Drum & Bass Tune of The Year and remains one of the greatest DnB tracks of all-time.

Since then they have gone from strength to strength, including their 2020 EP 'Signs' (Metalheadz), in addition to their latest releases on V Recordings, and UKF, ensuring they remain one of the most respected DnB duos in the industry.

We are very lucky to have an international artist in the country during these unprecedented times, so this is one not to be missed.

Also on the line-up we have the head-honcho of the Liquid Lowdown, Chiccoreli alongside the first lady MC Tali, as well as Liquid Lowdown's Reubix, Rhyas & NZ producer O:bverse.