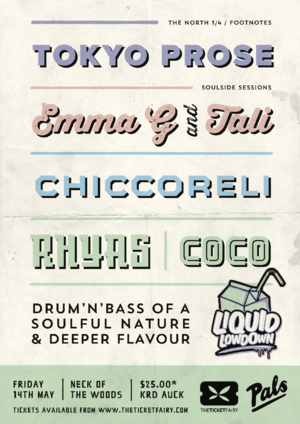 The Liquid Lowdown is one of New Zealand's premier D&B club night's, Concentrating on "Drum & Bass of a Soulful Nature & a Deeper Flavour

Tokyo Prose’s sophomore album on The North Quarter 'Wild Grace' delivered a masterclass in emotive musical storytelling. The project features some of his most sought-after works including the popular ‘Innate Motion’, ‘Trick of the Light’ and ‘Brilliant Corners’. ‘Innate Motion’ was also featured in Calibre’s BBC Essential Mix

Also on the line up we have the incredible Soul Sisters, DJ Emma G & MC Tali. The duo have been working together for the last ten years with their hugely popular SoulSide Session mixes listened to across the world in there ten's of thousands. The sessions bring 'Love, Peace & Unity' to D&B