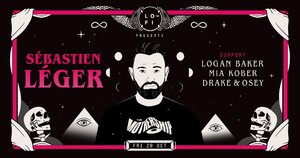 Sébastien Léger is an instantly recognisable name in the world of house music. LO-FI Productions are honoured to present the French maestro playing at Mothership on October 28. A trained pianist and drummer, Sébastien Léger has forged a hugely successful international career for himself.

He has remixed some of the world's best known icons, such as Groove Armada, Kylie Monogue, and Justin Timberlake. He has pushed out underground dancefloor hit after dancefloor hit, and runs one of the hottest record lables on the ciruit - Lost Miracle. He is a cornerstone of Lee Burridge’s hugely respected All Day I Dream empire and his sets are revered in musical circles. He weaves his magic across the globe, and he’s on his way here.

Expect powerful basslines and mesmerising synths, with clever hints at psychedelia, Léger effortlely maintains a dancefloor groove that is impossible not to move to. Supported by local legends Mia Kober, Logan Baker and Drake & Osey, this wil be a night of sonic goodness experienced through the smoothest sound systems in the city.   Mothership has landed in deep in downtown Auckland and we can't wait to add our LO-FI flare to create a audio visual extravaganza for you all. Tickets are on sale now, join us for an underground night of sublime sound in Auckland’s hottest new space.