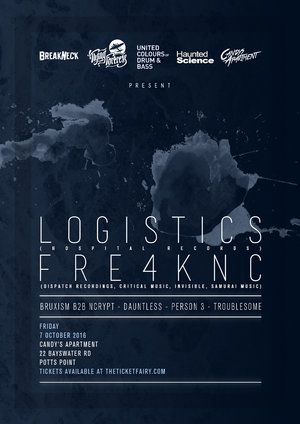 It’s been a great year for the Haunted Science, Breakneck, Flying Fortress & United Colours crews in Sydney, since we decided to ban together to bring you even more amazing Drum n Bass events both separately and together, it’s been a busy year and the parties just keep on coming.

This one is no exception and we are thrilled to bring Sydney two of our favourite artists, Logistics [UK] and for the first time in Sydney Fre4knc [NL], Representing two of the biggest labels in Drum n Bass today, Hospital & Invisible. From the lush liquid sounds of Hospital to the techie goodness of Invisible, this night has a little something for everyone.

Fellow Invisible artist Dauntless, joined by Bruxism b2b Ncrypt, shall also be gracing us with their brand of techie rollers, whilst we build the vibe with Troublesome, and the return of Person 3 earlier to set kick off the night.

#bring a smile and wear your best dancing shoes

We advise grabbing a ticket for this event

Logistics grew up on a self-prescribed musical diet made up of equal parts guitar-based compositions down tempo efforts and finally acquired a taste for Drum + Bass through the Full Cycle “Music Box” LP. The younger brother of Nu:Tone, Matt Gresham a.k.a Logistics, has gone on to become one of Hospital’s most prolific producers.

A true DJ at heart with many years of experience, Dutch DJ/producer Fre4knc (pronounced “frequency”) has been making waves in the studio. Due to stand out releases for Noisia’s Invisible, Critical Music, Samurai Music and Dispatch Recordings he has created his own raw, deep and techy drum & bass sound for the dancefloor.

Next to that he built his reputation as a DJ after playing on events like: Noisia Invites, Outlook Festival, Blackout, his own Break-Fast events and many others all across Europe. Now in 2016 he’s pushing his sound further with releases set for Invisible Recordings, Critical Music and Samurai Music.

With a versatile and infectious style, his tracks have already won support across the scene from the likes of Noisia, Photek, Break, Friction, Black Sun Empire, Fabio, DJ Hype, Icicle, SpectraSoul, Rockwell, Enei, Skeptical, DLR, Kasra and many more.

Dauntless is a name that doesn’t need much of an introduction to Sydney having been a part of the fabric of our scene for over 15 years, it’s been a long journey honing his craft all these years and with his recent release “Geomancy” on Invisible making some serious noise around the globe, we thought it was only proper to have him play alongside his fellow label mate Fre4knc.