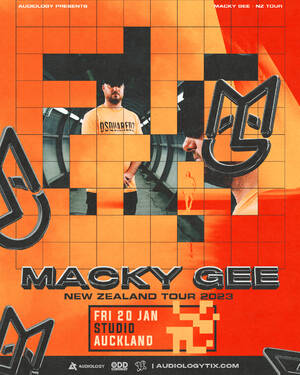 After Macky Gee's SOLD OUT Auckland show in 2021, he’s back at the infamous Studio the Venue

Smashing through the barriers of the conventional and carving a path for himself, Macky has turned the heads of some of the industries biggest players; tobecomeone of the most promising and spectacular artists in drum and bass music today.

From weekly radio shows to playing gigs around the UK and Europe, Macky wanted to carry on building on this creative vibe and soon found himself going to college to study Music Production learning his craft and honing his studio skills to give him both the desired confidence and knowledge to push forward making his own originaltracks which would eventually change the sound of Drum & Bass.

These new found skills lead to Macky releasing a whole list of dancefloor bangers which culminated into ‘Sway’ an album released in 2016 whichwent into the top 20 of the charts across the UKand Europe. The support for Macky from the general public was nothing short of amazing, something he will cherish forever.With support from DJ’s onRadio One, 1xtra, Kiss FM and Rinse Fm, his music is really making waves,not just in the clubs but over the airwaves.
________________