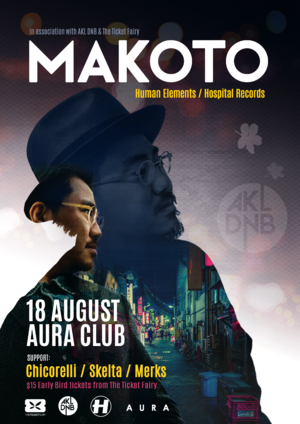 The Ticket Fairy in association with Auckland Drum & Bass Presents:

Following a slightly different direction, Makoto began to release music for other labels such as DJ Zinc’s Bingo Beats, London Elektricity’s Hospital Records, Fabio’s Creative Source and of course, DJ Marky’s Innerground Records. His musical connection with Marky runs deep, and was solidified with his very own mix cd released on Marky’s label in 2009 titled “DJ Marky & Friends presents Makoto”. The pair went gone on to collaborate and release a whole series of tracks together.