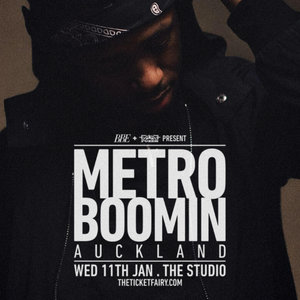 He's only in his early 20s, but Metro Boomin, the platinum-selling and Grammy-nominated producer and DJ, has had a recent run to rival the biggest names in music – a run that includes executive producing two Billboard chart-topping albums, Future’s DS2 and Drake & Future’s What A Time To Be Alive (and producing an astounding 18 of the two albums’ combined 24 tracks); executive producing Future’s 2016 Purple Reign; contributing production to four songs on Kanye West’s new album, The Life of Pablo; going on two North American tours – with Chance the Rapper, Travis Scott, and Young Thug; playing – including spot dates and festivals – over 100 shows in 2015; and simultaneously working with some of the genre’s biggest stars, a list of names that includes Nicki Minaj, 2 Chainz, Tinashe, Gucci Mane, YG, Ludacris, Wiz Khalifa, Meek Mill, Makonnen and more.

Despite all of this success, it’s the work that Metro has done building and solidifying his own brand that has proved most fruitful – indeed, the producer’s “Metro Boomin Want Some More!” tag, and more recently his “If Young Metro Don’t Trust You, I’mma Shoot You” and “Young Metro, Young Metro, Young Metro” tags have become some of the best known in all of popular music.

As the accomplishments continue to stack, it’s safe to say that Metro has experienced more success in his early 20s than most do in a lifetime. Despite that success, Metro is working to find new and exciting ways to interact with his fans and engage new audiences alike, working tirelessly towards his goal of becoming one of music’s most dominant names. Metro Boomin Wants Some More, indeed.