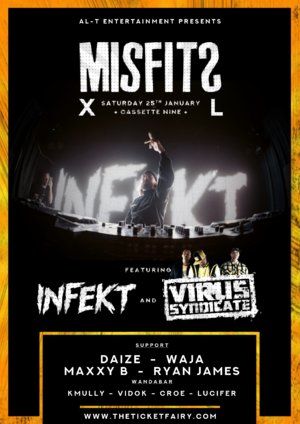 💫 YOUR MONTHLY BENDER IS BACK 💫

Christian Fial, better known has INFEKT has been producing since 2011, focusing on minimalistic, yet energetic basslines. He has released his music with the labels Disciple, Circus Records, NSD: Black Label, SMOG and much more. Which has gained support by numerous popular artists such as Kill The Noise, Cookie Monsta, Funtcase, 12th Planet etc. His previous live performances include sets at events like Drop In Bass, Night Grinderz, Havoc and Royal Bass. Be on the lookout as it's rumored that INFEKT is spreading to North America.

Virus Syndicate is a British hip-hop/dubstep duo consisting of JSD, Nika D, and sometimes Dyno. They have released on various labels across the EDM community, including but not limited to Disciple, RAM Records, and Ministry of Sound. Their first song on Monstercat was released on February 25th on the title track of Bossfight's Next Wave EP.

Keep a eye out for giveaways via AL-T Entertainment page throughout the week!