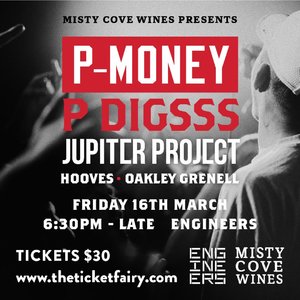 NEW ZEALAND’S TOP DJ IN CHRISTCHURCH FOR ONE NIGHT ONLY

To celebrate the launch of the 250ml wine in a can we are throwing a party of epic proportions. There will be an all-star line-up of DJs, dancers and full-scale production to wow the senses and let the lovable rogue in all of you come to life. Misty Cove has three different varieties in a can; Sparkling, Pinot Noir and Sauvignon Blanc which you will have the opportunity to try and you will receive a complimentary can on arrival.

Peter "P-Money" Wadams is New Zealand’s most renowned Producer and DJ. His incredible talents in the studio and on the decks have made him a household name and a pioneering figure within New Zealand music and internationally. Only a handful of DJs can create both a great live mix and produce amazing original songs, move a dancefloor in the smallest club and knock out main-stage festival sets of legendary proportions. There is only one man who fits that description in New Zealand – P-Money, the Papakura born DJ and Record Producer, is an iconic figure of the New Zealand music scene and for very good reason.
P-Money’s musical pedigree is certified with a string of number one hits and platinum selling albums to his credit. A true ambassador of NZ Music he co-wrote and produced five of the biggest New Zealand singles of the past decade; “Not Many”, “Stand Up”, & “Stop The Music ft Scribe”, “Keep On Callin ft Akon” and “Everything ft Vince Harder”. The latter of which broke through to UK airwaves on BBC1 and was dubbed Zane Lowe’s Hottest Record in the World.
As a teenager P-Money poured endless hours into his craft of DJ'ing and the skills developed during those early years are evident every time P takes the stage to perform. In 2001, P-Money cofounded independent record label Dirty Records, launching the careers of local rap superstars Scribe, David Dallas and PNC. When Dirty Records released P-Money's debut album "Big Things", an entire generation of Hip-Hop artists were inspired and a new benchmark set for all NZ releases to aspire to. This is an opportunity to see a true Kiwi legend, don’t miss out!

To ensure everyone has the greatest and safest experience possible there is a limited number of tickets available. To secure your spot book your tickets as soon as possible. All tickets include a complementary can of wine on arrival.