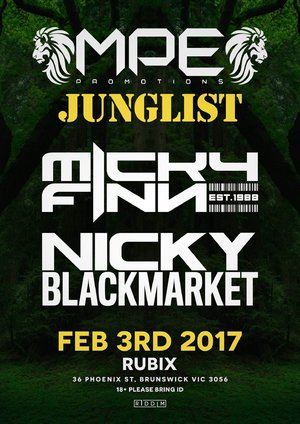 JUNGLIST (jun*gul*list)n. 1) The term itself is connected with the origin of the name jungle. During the time of junglists, they were sometimes referred to as "rude bwoii", a slang term originally used by Jamaicans (as rude boy), meaning "gangsta" or "badbwoy" ("bad boy"). The term refers to an inner city area of West Kingston, Jamaica, called Jungle (the subject of the Bob Marley song "Concrete Jungle", from the Wailers album Catch a Fire).
'Junglist' developed into a slang term for outlaw toughs who have ostensibly survived- or operate according to the 'law of the jungle'. Certain tracks made references to the "original rudebwoys" or "original gangstas" as denoting particularly respected junglists. Most members of this sub-culture took great pride in the music created by jungle producers.[citation needed]
Unlike some urban styles of music, drug-dealing is rarely mentioned in drum and bass tracks, but several MCs sometimes feature lyrics in relation. The only generally accepted illegal activity in the subculture are drug use and graffiti. Junglists often consume cannabis perhaps arising from the reggae roots of jungle music. Other terms applied to junglists in varying degrees are "ravers" or "drum and bassheads".[citation needed]
Junglists belong to what is seen as a predominantly UK-based drum and bass subculture. As a subculture, however, it is not nearly as distinct as goth or punk to the untrained eye, where members can often distinguish each other by their mannerisms and fashion without hearing their choice of music. Though predominately UK-based, some American jungle artists and American junglists alike have a large association with "gangsta" fashions. Also, the uprising of an underground scene in Eastern Europe have fashions of mid-'90s UK fashion. Many of those who identify as Junglists in Australia and New Zealand adopt a mix of rasta, rudebwoy and B-Boy fashions since jungle, drum and bass and hip hop have close ties as subcultures.

DJ MICKY FINN
https://web.facebook.com/djmickyfinn
https://soundcloud.com/micky-finn-1
Thin geezer, fat tunes: Micky’s a proud entertainer. No chin scratching, no anoraks, no mean n’ moody bullshit; just proper, wholesome fun. Revisit any of his mixes or releases from the last 25 years – especially the hugely influential bassline-heavy Urban Shakedown material with Aphrodite – and you’ll hear his sense of musical mischief instantly. That intoxicating party spirit that brought us to drum & bass in the first place; Micky’s never lost focus of the free-for-all creativity, the audacious low-end cheekiness, the unashamed vibes.
Naturally, he takes this fun seriously. Whether he’s behind the decks or, more recently, behind the desk, he’s something of a card carrying perfectionist. As co-owner of premier talent hub the Urban Agency, he takes pride in developing his company’s talent-touting roster. As a label manager he ensured the output on his imprints Urban Shakedown, Urban Takeover and Finn People was an essential staple of all the biggest DJs. And as a promoter he’s chapters ahead of the rest… His Sunbeatz rave holiday package concept drove drum & bass to Ibiza several years long before the current wave of white isle bass takeovers.
Business-aside, Micky’s still very much the entertainer; having teased floors with his incendiary selection since 1987, DJing has taken Micky around the globe many times over… Often by private jet. From the US to the Ukraine, Brazil to Bulgaria, there’s no territory he hasn’t smashed a dance in. Now, with more business commitments, the slots on Micky’s schedule are strictly limited and are highly sought after from promoters in every corner of the drum & bass loving world.
You’ll be pleased to hear he’s been seen lurking around the studio again too. His collaborations with Majistrate and Erb N Dub over the last five years have refuelled his passion for wholesome, bass-charged production mischief, and he’s back behind the mixing desk with his long term partner in grime Aphrodite. With several very special projects lined up for the near future, Micky’s still very much the entertainer… And still very much at the forefront of the scene he’s helped shape.


DJ NICKY BLACKMARKET
https://web.facebook.com/NickyBlackmarket
Nicky Blackmarket is one of the original pioneers of drum and bass, and he is still the most faithful soldier for the scene around the world.His early influences came from his mother’s background in the jazz scene, and it is improvisation and variety that characterises his DJ performances throughout his career.At the start of the eighties, Nicky was 14 and playing electro at youth clubs in London. He played with long-time collaborator Clarky and began to mix all forms of dance music, at house parties and on the radio.Friends FM, run by Mad B. This lead to Nicky joining the ranks of Blackmarket Records in 1990. In 1992, as the house scene moved towards breakbeat, Nicky created a separate department downstairs to cater for the sound that would eventually be called Drum and Bass.In the mid-nineties Nicky pushed the hardcore scene with a regular show on Pulse FM and performances at the Roller Express. He moved into production, making his first record “Spam EP”, along with various remixes and releases on his label Gyroscope, with artists like Ray Keith.
This exposure fuelled his DJ career and Nicky decided to put all his efforts into playing his music around the world.
“…first and foremost I am a DJ.”
As the jungle scene exploded Nicky formed his legendary partnership with the late Stevie Hyper D. These performances are still regarded as the standard by which all others are judged, and MP3s of those sets will probably be on the internet forever.
Blackmarket Records supported the scene as a focus for the community, an essential component in an world without the internet. Nicky started another label “Kartoonz” featuring the anthem “Two Degrees”, confirming his status as a central force in the scene.
Unlike many superstars, Nicky still works in his shop and is a promoter of fresh talent and ideas, unafraid to help new artists and organisers push the artform forward. His love of drum and bass keeps him from descending into the mindless repetition and lazy performances characteristic of many in the scene.
Nicky invites you to sample his philosophy at the shop in D’Arblay St, London, or at any of his shows around the world.
Whooiiiiiiiiiiiikked!