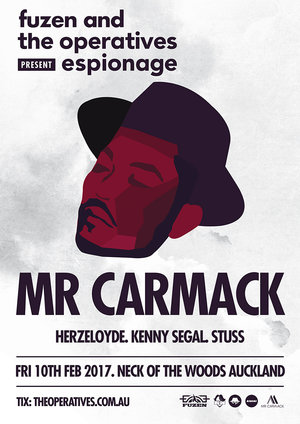 TopInfluencers
Fuzen + The Operatives team up to present the very first Espionage showcase in Auckland!

Who better to kick things off than the mighty Mr Carmack, back after tearing up AKL at Laneway 2017.

You only have a couple of days to sort your tickets, so get organised now!

San Francisco-born, LA-based Mr. Carmack occupies a frontier between a range of different genres, identified by his contemporaries, fans, and himself as purely Carmack. With tasty hip-hop beats the bed-rock of his music, he is one seriously inventive producer. He’s efficient too: only two months after sharing his 2016 Yellow EP, he dropped an epic 54 tracks on SoundCloud, ‘cos why not? There’s more where that came from – with a solid devotion to the studio and a grinding work ethic, Mr Carmack is set to release new music in the coming months.

Joining him will be Australian must-watch artist: Herzeloyde, hand picked by Mr Carmack to join him for the AKL show and Auckland star on the rise: Stuss.