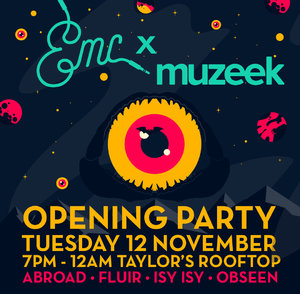 You're invited to the official opening party for Electronic Music Conference!

Muzeek is proud to present the Official EMC Opening Party to get you psyched up for 2019's Electronic Music Conference.

Co-curated and hand-picked by the Muzeek Team:

ISY ISY combines the bold, the delicate, and the radiant. Her music is a vivacious explosion of sultry bass, effortless groove, and unapologetic self-love.

OBSEEN AKA James Guido is no rookie to the music world. Having taken his music internationally in 2016 and being featured by major artists, Obseen released a string of collaborative singles in 2017 which took a share of charting success on Triple J’s unearthed. In early 2019 Obseen was asked to play at Farmer & The Owl Festival supporting Hockey Dad and Beach house. Debuting his new live set and addition of live band and has been described as “A tough act to follow” with his “Huge sound”. Expect more from Obseen in 2019.

ABROAD is an Indie/Electronic duo based on Australia’s east coast. Named for the city in which they were written, the EPs London and New York were released to great success, with over one million streams on Spotify.

Please RSVP to let us know you'll be there!