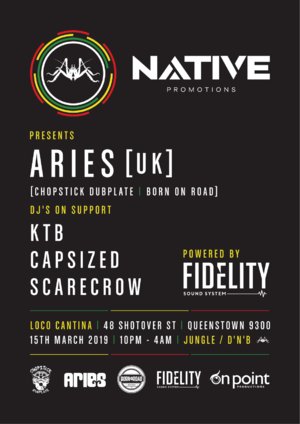 
Reggae and Jungle are genres of music with strong roots in the UK and Aries has immersed himself in both cultures which has heavily influenced his whole ethos to production and DJing. It is this integrity and dedication to the scene which has earned him respect amongst his peers meaning he now flies the flag internationally for modern day sound-system culture.

He broke through to the A-list of the Jungle world after releasing music on legendary record labels: Congo Natty, Dread and V Recordings, plus Aries has recorded with a whole world of vocal talent that does by no means stop at Top Cat, David Boomah, Solo Banton, Nanci & Phoebe, Demolition Man, Jah Mason and Johnny Osbourne. His DJing is in demand across the globe having played high profile DJ sets in most major countries.