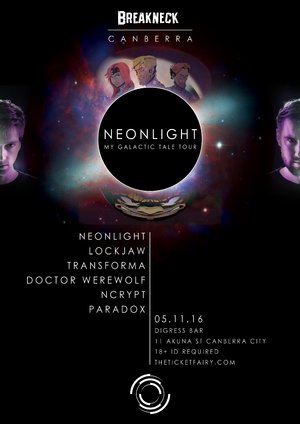 Alert the Capital, we’re coming back for more! After such an excellent show, and with so many Canberrans turning up and smashing it out at The Upbeats, we couldn’t be happier to make the trip back down and this time showcase some of the ACT’s absolute favourites, alongside Blackout's outrageously gifted duo NEONLIGHT, who have recently released their stunning interstellar journey of an album - My Galactic Tale.

These homegrown heroes have been making waves in recent times, with Lockjaw delivering the world his exceptionally talented and stylised producing, encapsulating a dark techy vibe that has long been pushed by his label home Invisible, alongside his own label creation Locked Concept bringing the deeper sounds to the surface.

Our brother Transforma has been making waves recently, rapidly expanding his international releases and being noticed for his heavy hitting tunes that keep the night heaving. He's been kicking it into overdrive with a firm grasp on what is making his production sound so powerful and ensuring those who are still to hear his name, get the best impretion.

The ever cheeky and Canberra city favourite, Doctor Werewolf, with his eclectic sound and party vibe, will be showing everyone why he is a force to be reckoned with as he brings the ruckus, and enters into the foray of something a little more sinister.

Last but not least is the robot warrior Ncrypt going back 2 back with the mighty Paradox. these gentlemen will leave it all on the decks and we know you'll be impressed with the ability to deliver some incredibly technical mixing proficiency.