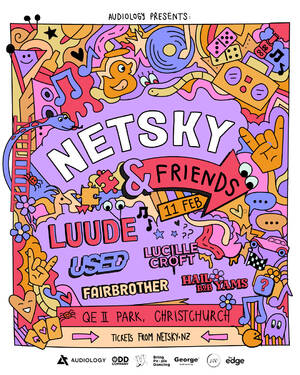 Get Tickets
TopInfluencers
A MIND BLOWING NEW SHOW CONCEPT IS ABOUT TO HIT NZ.

Following Netsky’s sold out run in 2021, he is back taking his Netsky & Friends concept to cities throughout NZ in partnership with Audiology Touring this summer!
Audiology, George FM and The Edge present:
Netsky & Friends: The country’s biggest house party.
NETSKY
LUUDE
USED
LUCILLE CROFT
FAIRBROTHER
HALI B2B YAMS
February 11th
QEII
Christchurch
4PM - 10PM
R18
Imagine giant inflatables, heaps of confetti, a party on stage, and some of the craziest entertainment you’ve ever seen at one of our events.
ABOUT NETSKY
Internationally renowned DJ and producer Boris Daenen aka Netsky, is as comfortable headlining stages at the world’s biggest festivals as he is behind the boards in the studio. Netsky has wowed audiences across the globe from Coachella to Glastonbury. In 2017 he launched his ‘Netsky And Friends’ brand, curating and hosting his own stage at Tomorrowland (alongside headlining the festival’s Main Stage), and has continued to roll out this concept at festivals and clubs throughout Europe, with more planned globally for 2023. As well as a legion of truly global fans, Netsky has won a host of accolades; he was the youngest ever recipient of the Flemish culture Award for Music and was voted the highest ranking Drum & Bass DJ in the DJ Mag Top 100. With four successful studio albums and a slew of A-List artist remixes under his belt (Dua Lipa, Ed Sheeran, Swedish House Mafia, Jack U and more), Netsky signed to Republic Records in July 2018. Having worked for 6 months in the studio in Los Angeles with Multi-Grammy winning hitmaker producers Stargate (Rihanna, Jay Z, Coldplay), he released collaborations with David Guetta, Bazzi, Lil Wayne and Aloe Blacc. In 2020, Netsky took the drum & bass scene by storm with the announcement of his return to Hospital Records for a one-off project and his fourth studio album, ‘Second Nature’. The record, which was was globally and critically acclaimed, marked the 10 year anniversary since his self-titled Hospital debut and rolled into his 'Glasshouse' arena tour of New Zealand, where he sold over 60,000 tickets. Netsky brought his 'Glasshouse' production to sold out shows this year at Printworks in London and Lotto Arena in his hometown Antwerp ahead of a busy summer, which saw him kick off a new partnership with Helix Records with the release of smash single 'Barricades' featuring international superstar Rita Ora.
Don’t miss your spot on one of the most anticipated tours of the year.
Thanks to:
100 Management
Odd Company
George FM
The Edge
V Energy
Bring People Dancing
TopInfluencers