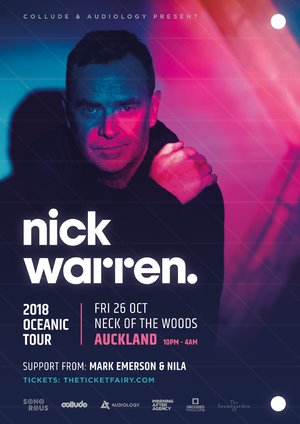 Nick Warren became one of the first so-called "superstar DJs" in the mid-to-late '90s, holding down a high-profile residency at Cream in England, touring around the world, and appearing on several DJ mix albums before they became commonplace. Though he spun an eclectic array of dance styles in the late '80s and early '90s, he eventually championed the late-'90s trance sound of labels like Hooj Choons and joined the ranks of other superstar DJs like Paul Oakenfold, Sasha, and Tall Paul.

Before leading a jet-set lifestyle, Warren moved to Bristol in the 1980s after having just turned 20. By the early '90s, he was one of the city's top DJs, spinning upstairs at Vision, one of the city's first super-clubs. At the time, Warren spun everything from dub and hip-hop to house, which became his preferred style.

When fellow Bristol artists Massive Attack left to tour America in the wake of their early success, they invited Warren to accompany them on tour as their official DJ, a testament to his turntable skills as well as his reputation at the time. Eventually, Warren began a massively successful stint as the resident DJ at Cream in Liverpool.

The years that followed saw Nick Warren enjoy a whirlwind of success. Through a combination of providing acclaimed mixes for Mixmag, DMC, and the hugely successful Global Underground series, and releasing a string of club-smashing solo singles, Warren found himself catapulted into the electronic and house big leagues; and, by continuing to release acclaimed albums, singles, and remixes with his Way Out West partner-in-crime, Jody Wisternoff, and remixing tracks for the likes of Lana Del Rey, he firmly established himself as a truly multi-faceted producer of top-quality dance music.

Having already graced the decks at every self-respecting super-club on the planet and made his name as a superstar DJ, the late Noughties saw Warren turn his hand to the business side of the music industry. Now, as the A&R of Bristol-based Hope Recordings, he spends his time seeking to hone and promote the next generation of club-smashing DJ and production talent; and, through the expansion of his label The Soundgarden into a globe-straddling international events and entertainment brand, set in stone his already firmly-established reputation as a giant of electronic, techno, and house music.

With a flurry of new releases, further The Soundgarden live events, and a highly-anticipated Way Out West live tour already in the diary for 2018, Nick Warren is showing no signs of slowing down; and, if the continued devotion of his ever-expanding fan-base is anything to go by, that’s a decision that will be welcomed with open arms by dance music lovers the world over.

Thanks to
Morning After
Sonorous