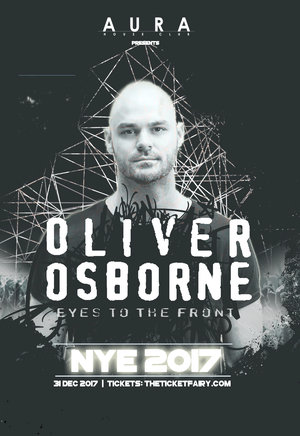 TopInfluencers
Aura Entertainment bring you Oliver Osborne, NYE 2017 in Auckland at your favorite house club - A U R A !

2016 was a big year for Oliver, having played Ultra Singapore, launched his record label ETTF Music, and played extensively across Asia. This year started just as strong, with the likes of &ME and Stefano Ritteri playing his tracks, closing out Kolour In The Park in Thailand, playing one of the last ever sets at Bali's Koh, and being booked for a second time at Ultra.

Oliver Osborne moved to Singapore from London where he played at such notable clubs as Fabric, Corsica Studios, The Scala, 93feet East, and many more, during his time there he played along side the likes of M.A.N.D.Y., Maya Jane Coles, Stefan Bodzin, Noze, and Matt Tolfrey to mention a few.

Since being in Singapore, Oliver has played everywhere worth playing, and in May of 2013 was part of the team that started the After Dark pop-up parties, at the hidden gem that was the original Kilo Lounge. He also brings his musical agenda to various parties around the city, and hosts the phenomenally successful Eyes To The Front pool parties.

Though Oliver learnt to DJ on a diet of jungle, drum and bass and hip-hop, his ear eventually turned to house and techno, and his current sound has taken him around some of Asia’s top underground clubs, such as Glow in Bangkok, Lola, Shanghai, Jenja in Bali, Oma in Hong Kong, and as far afield as Mongolia.

Of late he has been honing his production style, with releases and remixes on Jays Records, Dolce Music, Neverest, Fine Grind Audio, and his own imprint ETTF Music.