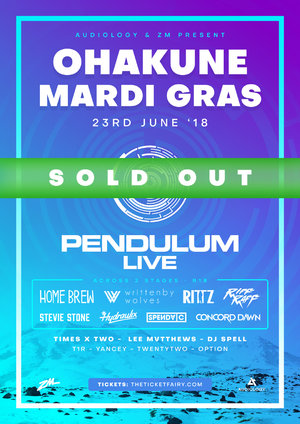 Stellar line-up announced for the return of Ohakune Mardi Gras


Presented by Audiology and ZM, the Ohakune Mardi Gras will be held across one action-packed day, on Saturday, June 23 and this year boasts the biggest and the best line-up in its 20-year history.

Headlining the one-day extravaganza will be one of the world’s most iconic drum ‘n’ bass acts Pendulum. Earlier this year, the band officially returned to the forefront of the dance scene, announcing a string of new live shows and a remix album, THE REWORKS throughout the first half of 2018. Also being released this year is THE COMPLETE WORKS.

This will be one of the first live (with full band) Pendulum show in seven years. The band is - without question - one of the most electrifying live acts around and will close Mardi Gras on the Main Stage.

Also sharing the main stage will be crowd-pleasers Home Brew as they throw their distinctive blend of hip-hop into the mix. Colourful rapper Riff Raff, also joins the stage as well as Auckland up-and-comers  Written By Wolves, who’ve been carving out a name for themselves with their unique style of rock, join the line-up; as do Stevie Stone, Rittz, Times X Two and DJ Spell.

Headlining the Bass Stage is one of Australia’s hottest electronic acts Spenda C, known as one of the hardest working DJs around.

Other must-sees on the Bass Stage acts include Hydraulix, Lee Mvtthews, Yancey, T1R and TwentyTwo.

Now presented by Audiology - the promoter behind a number of other notable music events, including Bay Dreams - the new Mardi Gras will stay true to the spirit of the event, which has always been known as a mid-winter celebration with a street-party vibe.

Tickets for the Ohakune Mardi Gras are sold out.