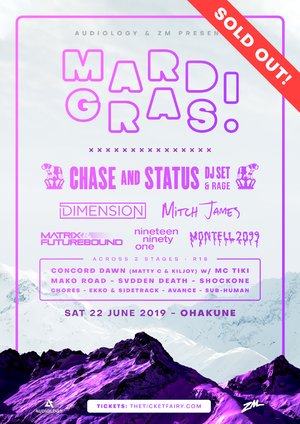 New Zealand’s biggest winter party is back with a vengeance!

Mardi Gras will return to Ohakune on Saturday June 22 and due to overwhelming demand, this year’s party is debuting in Queenstown on Sunday June 23.

Both the Ohakune and Queenstown events kick off at 5.00pm and end at 12.00am with a top-notch line-up of some of the the world’s most favourite dance floor fillers. They include UK legends Chase and Status DJing with MC Rage; drum ‘n bass extraordinares Matrix & Futurebound and Kiwi whizzkid Montell2099.

They’re joined by Mako Road; ShockOne; Chores; Sub-Human and Avance. Incredibly, there are still more to be announced.

Tickets for Mardi Gras Ohakune and Queenstown are on sale Monday May 1 at 7.00pm. Get in quick for early bird tickets (available for 24 hours) starting at $99.

After a one-year hiatus, Ohakune’s famed Mardi Gras returned in 2018 with Audiology (the promoters behind some of NZ’s biggest festivals, including Bay Dreams and Soundsplash) at the helm. The new-look festival proved a smash hit, selling out and re-establishing itself as New Zealand’s premiere mid-year festival in one of the North Island’s most well-known winter wonderlands.

Promoters are now excited to extend the Mardi Gras magic to the South Island, with a more intimate show for a crowd there of 3000, taking place up top Coronet Peak, one of New Zealand’s most popular ski resorts.

For the uninitiated, Mardi Gras is an event like no other, which takes its ‘street party vibe’ from famous Mardi Gras-style events around the world. Expect colourful and vibrant outfits; dancing in the streets and good times galore.

Tickets are expected to be snapped up for both events, so don’t sleep on what’s promising to be winter’s most outrageous event.

Tickets on sale 7.00pm May 1 from www.theticketfairy.com (earlybird deal goes for 24 hours starting at $99).