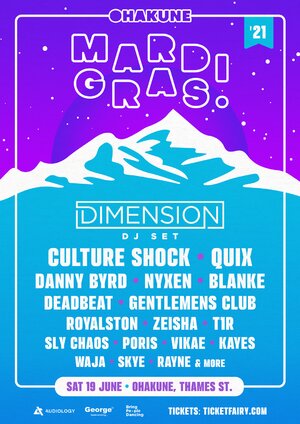 NZ's craziest winter festival is BACK!

Tell your boss you're outta here, book in your accom - it's nearly time to hit the road for the greatest weekend you can have with clothes on.

& more to be announced

Mardi Gras is proudly an all-inclusive event! We welcome people from all walks of life and your safety is important to us. 50% of proceeds (Ohakune) are donated to a Charitable Trust which benefits the region throughout the year. We are also proudly proactive in our extensive waste management with over 80% diverted from landfill. Please bring only your best attitudes!

Starting at just $99, available from The Ticket Fairy.

These are operated externally; bear with us and we'll release the information as soon as we receive it.