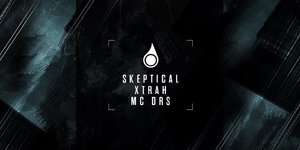 It’s been a long summer for us here at Overflow but we’re buzzing to be back amongst it! We’ll be kicking off our term on the 20th October where we’re welcoming two artists to Wire that we’ve yet to book - Skeptical & Xtrah.

Highly regarded as one of the finest technical producers in DnB, Skeptical has been responsible for some of the biggest tracks around over the last few years, with releases streaming out on Exit, Dispatch, 1985 & Metalheadz. One of the figureheads of the low down, minimal sound his productions have been hammered left, right and centre... We’re really looking to this!

Joining him is Cyberfunk records head Xtrah, another of the DnB elite who’s production value speaks for itself. His most recent outing on Dispatch the ‘Disturbance EP’ was a tour de force in heads down, thunderous Drum & Bass, and with his label going from strength to strength 2017 looks set to be another storming year for the man from London.

On mic duties we welcome back one of the finest to ever do it - MC DRS… We don’t need to say too much about this mans career, having booked him numerous times since starting - He’s a firm favourite with us and our fans.