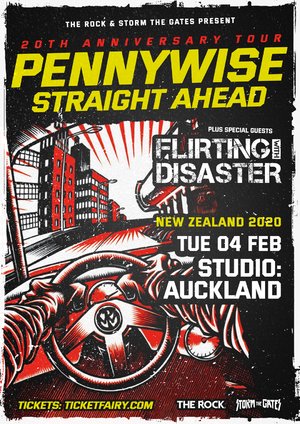 + The band to play STRAIGHT AHEAD in its entirety

Pennywise have announced a New Zealand show as part of their 20th Anniversary Tour, where the So Cal punk rock legends will be performing their album STRAIGHT AHEAD in its entirety, plus fan favourites.

Presented by The Rock and Storm the Gates, Pennywise are at the Studio in Auckland on Tuesday, February 4, 2020, with special guests, Kiwi punk outfit Flirting With Disaster.

Tickets to the R18 show go on sale on Tuesday December 17 at 7.00pm from www.ticketfairy.com

Formed in the South Bay of Los Angeles, a neighbourhood with a rich punk rock history, Pennywise began in 1988. The band would go on to amass an international following through relentless touring and a melodic high energy sound merging melodic surf punk, blistering hardcore and the classic punk of their youth.

The group has solidified their place in punk history with songs like the raging ‘Fuck Authority’, ‘Alien’, and the band’s legendary ode to brotherhood and departed friends ‘Bro Hymn’.

The album STRAIGHT AHEAD, which the band will play in full to celebrate 20 years in the game, was released in mid 1999. Regarded by some as the band’s strongest work, Sputnik Music describes the record as “full of fast, heavy, rockin' punk rock… one of the symbolic punk albums of the '90s and a definite classic from one of California's finest exports”.

Fans be warned! This is a show not to be missed. The last time Pennywise played in New Zealand in 2011, the show sold out within two weeks of going on sale, so get in quick to secure your spot at what promises to be the punk rock tour of the year.

Tickets on sale Tuesday December 17 at 7pm from www.ticketfairy.com