The Slate Room , Christchurch [All Ages] 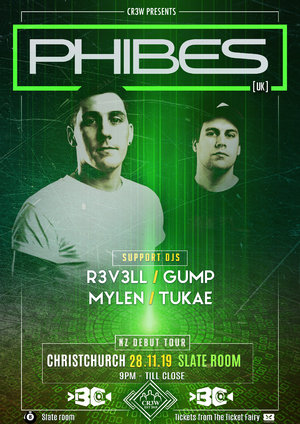 CR3W is proud to announce our first NZ tour with PHIBES!

Known for their high powered electric live shows and speaker shaking production, the real life brother duo Phibes have set the scene on fire in the last 24 months. With a huge catalogue of remixes, originals and album no.1 firmly under their belt they have been touring the world in 2018, hitting over 10 countries, 20 festivals and 100+ dates not to mention smashing sets at esteemed festivals like Glastonbury, Boomtown, Beatherder, Shambala (CAN) and The Isle Of Wight Festival.


Having gained support from respected artists across the board such as Shy FX, Joyryde, Ed Solo, Holy Goof, Skepsis, Krafty Kuts, Darkzy, Benny Page, Maduk, Deekline, Freestylers and sharing the stage with numerous titans like Chase & Status, High Contrast, Ed Rush, The Prototypes, Kings Of The Rollers, Guv, DC Breaks, Fred V & Graphix. The brothers are well versed in professionally bringing a rave to its peak whether they are headlining or supporting.

In the past year Phibes have received massive support from Youtube powerhouses Deeprot and have become a leading UK Drum & Bass act to watch on social media, scooping up huge, positive support from their fans whenever they release. As well as a boast of viral remix hits on their Soundcloud in Voodoo People, Paper Planes, Afterglow, Sound of Da Police and Light it up and regular Soundcloud chart topping releases, they have in less than 2 years become the go to for DJS when it comes to remixes in Drum & Bass.

The lads just came back from a successful festival season and a nationwide Canadian tour with a 22 Show UK Tour to kick off during freshers week. 2017 saw Phibes stand up, 2018 has seen them walking, in 2019 they'll be no doubt running towards the top of their game.