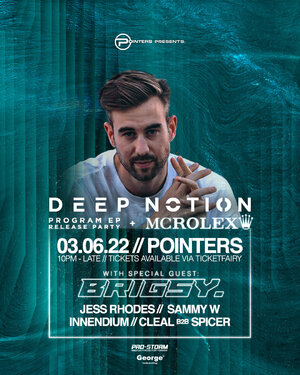 It is a Friday so you know what that means..? Pointers Presents are back into the swing of it with yet another stacked local line-up that will provide you with your weekly fix of all gas and no brakes.

We are stoked to be able to present Auckland heavyweight Deep Notion's release party for his brand new two-track EP on ProgRAM Records, the sister label of the legendary RAM Records.

Tickets are now on sale via Ticket Fairy!

Deep Notion, also known as Adam Cooper, is not a new name to the NZ Drum and Bass scene and has truly cemented himself as one of the most exciting producing and DJ talents in NZ since making his debut in 2016.

Since then, Deep Notion's rise to prominence within the NZ DnB industry has been nothing short of remarkable, with several music releases on both domestic and international labels including Serotone Recordings, Night45, Protocode, 4 Corners, and many more. Having tunes showcased on Jump Up Cave, Bass Rabbit, and Raving Panda. His biggest production achievement to date is signing a 2-track EP on the sister label of RAM Records, ProgRAM and with many more international label releases on route the sky is truly not the limit for Deep Notion.

The high energy and intensity poured into his sets showcases through his production and has earned himself support from some of bass music’s most prominent names such as Bou, Ben Snow, S.P.Y, Document One, Terrence & Philip, Dutta and the Born on Road crew.

His big show mentality has also seen him headline shows in Wellington, Auckland, and Christchurch whilst also playing special guest slots alongside major international artists across the country. The Auckland based DJ and producer has also made appearances at major NZ summer festivals, such as Rolling Meadows, and has his sights on many more.

As the producer and DJ looks towards the rest of 2022 and 2023, things do not look like they are slowing down as he prepares to showcase an arsenal of new tunes, with backing from major international labels, which will be sure to bring the heat to crowds around New Zealand and beyond…

Deep Notion. The desire and belief of all things deep, dark, and heavy.

Tickets are now on sale via Ticket Fairy!