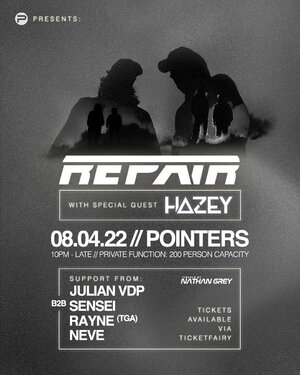 Pointers is stoked to be back in action with a huge line-up.

We cannot wait to be dancing with you all 200 of you.

Kiwi duo Repair join forces with over 12 years of combined production experience, and prominent releases under their different alias’.

Inspired by the likes of Turno, Kanine, Metrik and Culture Shock, Repair bring their own unique flavour to drum & bass which has already garnered rave reviews from Hybrid Minds, Bou and A.M.C.

Having signed to Tenfold Agency and Tenfold Records, the boys set out to tackle the thriving scene in New Zealand, and soon to be the world.

Hazey is making waves throughout the NZ DnB scene and with a stellar release 'Back To Life' under his belt and collection of dubs that he is currently sitting on, the sky's the limit for
this DJ and Producer.

Having already played at some of New Zealand's most sought after events and playing support for multiple international acts such as Kanine, Turno, K Motionz and Pola & Bryson (to name a few..).

Hazey is most definitely one of New Zealand’s fastest growing talents.

TICKETS ARE ON SALE NOW!

We only have 200 tickets available. First in, first served.