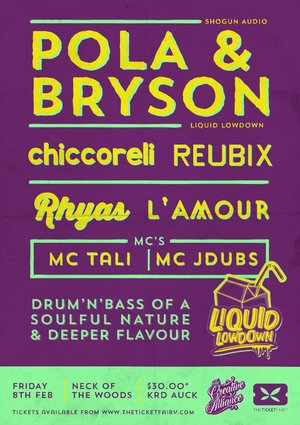 Pola & Bryson are two of the most exciting next generation producers currently making moves in global drum & bass. Creating some of the biggest waves in the shortest time, they’ve shot into the scene with their own carefully sculpted brand of melodic, electronic music.

Having met back in 2012, mutually bonding over their shared love of drum & bass purveyors such as Roni Size, Commix, High Contrast, Logistics and Dom & Roland, Jack and Harry began producing music together when Harry made the move to London to study. Both classically trained from a young age on trumpet, piano and drums, the musical roots of Pola & Bryson run deep, a foundation for all their work that would follow.

Putting out their first D&B releases in 2014 and setting up their Soulvent Records label that same year, the P&B sound managed to push far and wide with a series of power moves through their own label events and networking, quickly garnering support from the underground with the likes of London Elektricity and the Hospital roster picking up on their talent as well as a certain Friction on BBC Radio 1.

With their releases picking up pace and DJ dates across the country including the huge Hospitality events and their own Soulvent nights, 2016 saw them firmly make their mark with their debut album ‘This Time Last Year’, released to much critical acclaim from both the press and their peers. The year culminated in two nominations at the D&B Arena Awards for ‘Best Newcomer Producers’ and ‘Best New Label’, quite an achievement.

2017 marked the next major step as the duo announced their exclusive signing to Shogun Audio, joining one of the most illustrious rosters in drum & bass. Having already found favour with the likes of Danny Howard, Friction and Mistajam on BBC Radio 1 with their first 2 outings on Shogun Audio in the form of the 'Find Your Way EP' and the 'Unsaid EP' plus official remixes for Moby and Jonas Blue.

2018 has been the most successful year to date for the the Duo, playing at all the major festivals around the world and releasing the critically acclaimed EP 'Stratford Riddim'

We're really excited to welcome Pola & Bryson to New Zealand for the first time and i hope your are too.