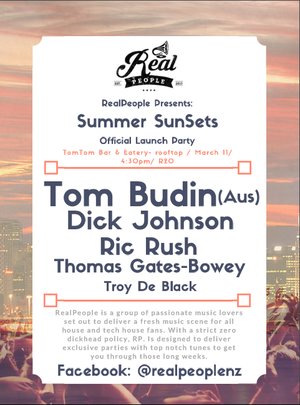 Prep your dancing shoes, RealPeople are set to deliver you nothing but positive vibes with a sunset party at a secret location this March. This exclusive party is set to unite like minded people through music with DJ's bringing you nothing but the freshest in house for the evening.

- UPDATE -
We have just secured our headliner!

Tom Budin is set to hit Auckland shores on March 11th and if you know the name then you know for sure it's going to be one heck of a party.
Hailing from across the ditch (Sydney, Australia), Tom Budin is no doubt setting big waves in the Australian and International dance music scene.
At the ripe old age of 20, Tom has a sizable global following, zillions of plays & downloads, signed records to SONY USA, Spinnin Records, Heldeep Records, One Love, Ministry of Sound, Universal Music USA, Perfecto and officially remixed number 1 singles such as Zedd – Clarity & Lost Frequencies – Are you with me.
Support from Diplo, DJ Hanzel (Dillon Francis), Oliver Heldens, Zedd, Bloody Beetroots, Don Diablo, Drezo, Lost Frequencies, Tommy Trash, Belt and Wezel, Danny Howard (BBC 1), Juicy M, Sick Individuals + many more.

We look forward to seeing you all there!