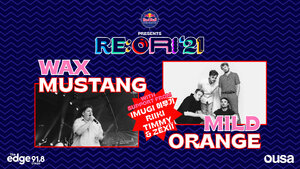 A huge Thursday night is incoming, and what better way to spend it than with Wax Mustang and Mild Orange! A mix of hip hop and indie vibes, what more could you want?!

Wax Mustang AKA Hamish Calder is a force to be reckoned with, either in your headphones, or on any stage you find him. Mustang's music somehow finds a balance between throwback hip-hop and 80's rock. We’re not sure how he does it, but I guess that adds to the enigma that is… Wax Mustang.

Mild Orange is a dream pop and indie rock band from New Zealand. Formed whilst studying at Uni of Otago, The Mild Orange sound is distinctly known as ‘melting melodies’ - a phrase to capture the energy and vibrancy that comes out of the bands lust for smooth sounds.