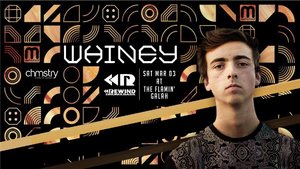 Rewind DnB are please to announce UK artist WHINEY (Hospital / Medschool ) 2018 Australian Tour has been locked in.. and Brisbane is again on the roster!

*No Hard Copies or Industry tickets - Online tickets & Door sales only for this event.

Coventry-born Will Hine has developed an impressive skill set, successfully carving out his signature sound and passion for drum and bass.

After discovering a love for Pendulum and becoming inspired to delve into the world of music production, Whiney had his debut release on Subsphere Recordings back in 2012, an exquisite collaboration with Keeno called the “Sweetest Sin” EP.

With Huge success of his Sweetest Sin EP, Whiney quickly found a home for his later releases, featuring twice on Med School’s “New Blood” compilation series and Hospital’s “Sick Music 3″ and “Hospitality 2015″ albums. In 2016, Whiney’s artistic journey took him into new territory with his debut solo EP on Medschool, ‘Stranger Tides’, moving him away from his usual liquid gems and defining his sound as much deeper, darker and dancefloor focussed.

In 2017, Whiney truly set the drum & bass scene alight with his incredible debut album ’Talisman’. A 12 track beauty with a seamless mix of dancefloor weapons, deep rollers, melancholic moments and collaborations with Urbandawn, Keeno and MC Inja. An album of this calibre was only ever going to garner widespread support from the drum & bass community, and subsequently Whiney was nominated for three separate accolades at the 2017 Drum & Bass Arena Awards, up for Best Newcomer, Best Album and Best Track for the anthem that was ‘Flashlight’ feat. MC Inja. The entire album, Flashlight in-particular picked up some incredible club support from the DJs DJ: Randall.

With the release of ‘Talisman’, Whiney has fully established himself as one of the most forward-thinking artists the Drum & Bass scene has to offer. Not content with resting on his own laurels, Whiney is definitely one to watch out for as he continually pushes the boundaries of what both his sound and the genre is capable of.