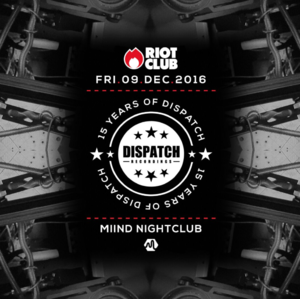 
It’s our turn to celebrate as the 15 Years of Dispatch Recordings Tour rolls through town this December.


★ Ant TC1 at the controls for a large 2 hour set.
★ Our very own Dispatch artist DAUNTLESS for the launch of his new EP.
★ A selection of Sydney Drum and Bass acts on support that best represent the Dispatch sound including Vertigo, Ella Lions and Ang Leon.
★ And lastly Element MC on hosting duties….


This is going to be something special.

Ant TC1 along with Hidden Agenda founded Dispatch Recordings back in 2001, Ant originally helped out with the management side of the label before finding his feet within the realms of production; which was a natural progression for him having DJ’d on pirate radio and in clubs from the age of 14 (since 1992). His first release alongside frequent production partner Stress Level appeared on Dispatch after almost 3 years of hard work getting their collective sound where they felt it needed to be before even thinking about turning on a DAT recorder. After their first release hit the stores they quickly picked up a wealth of DJ support across their early material and went on to release for a who’s who list of established Drum & Bass record labels including the likes of Renegade, CIA, Advanced, Critical Records Integral, Liquid V, Commercial Suicide, Good Looking Records, Bingo Beats and Samurai Music.

By demand remix work started to feature heavily within their output and the duo went on to remix for the likes of Hidden Agenda, Chris SU, Artificial Intelligence, Kabuki, Total Science, Optical & Ryme Time (Jagged Edge), Atlantic Connection, Tactile & DJ Marky. Branching out and working with other producers such as Survival & DLR has only furthered experience Ant’s skills at the controls over the years, Ant has
also released his own solo material more recently on top of remixing for the likes of Lomax on Integral Records.
In 2014 Ant realised a lifetime ambition, securing his first ever release for the legendary Metalheadz label “Hungry For Atmosphere” alongside
Mako, DLR & Villem. Ant’s production output has featured on a mass of compilations and mix CD’s compiled by the likes of Shy FX, LTJ Bukem, Total Science, AI, Spectrasoul, Klute and Brian G. Additionally his work has featured very heavily within the radio shows of Friction, Grooverider, Fabio Goldie & Bailey on their respective BBC Radio 1 slots over the years as well as BBC 1Xtra where Ant once hosted his own one-off 4 hour show, he has since additionally made 2 guest appearance for DJ Friction on his Radio 1 show. His DJ’ing work has seen him play all over the globe from Adelaide to Los Angeles, from Hong Kong to Sarajevo, Tel-Aviv to Bangkok and last but by no means least regularly UK and EU wide.
Fast forward to 2015 and Ant is now responsible for the label management roles of both Metalheadz & Dispatch Recordings. Having released a compilation series on Dispatch, the hugely successful
“Transit One” & “Transit Two” albums (topping almost all the usual stores weekly dance music sales charts across all formats), the label features a fine list of consistently quality single and EP releases from the likes of DLR, Break, Survival & Silent Witness, Marcus Intalex, Klute, Nymfo, AI, Zero T, Cern, Dabs, Skeptical, Dub Phizix, himself (and many more). Ant has recently remixed material for the likes of Cern & Dabs, Sunchase, Quadrant & Iris, Friske as well as having his own
solo work remixed by Xtrah along with working on further collabs with the likes of Survival & DLR. Ant is also the head of Artist Mana
gement at both Outlook & Dimensions Festivals, playing a pivotal role in bringing consistently strong Drum & Bass acts to the Croatia every year, earning back to back 2013 & 2014 “Best Festival” accolades in both the Festival Awards & the Drum & Bass Arena annual awards.
http://dispatchrecordings.com/
http://www.metalheadz.co.uk/
https://www.facebook.com/AntTC1
https://soundcloud.com/anttc1
https://twitter.com/AntTC1
★ DAUNTLESS : No Escape EP Launch. ★
(Dispatch / Invisible / Commercial Suicide)

Sydney’s Dauntless has been especially busy this year, with extensive work in the studio resulting in a slew of releases in recent months. Having dropped previous releases alongside studio partner Fuj on Scientia and Skutta Records, he continued on to have his tune ‘Geomancy’ picked up for Noisia’s Invisible imprint, included on the INVISIBLE 021 release alongside names Fre4nkc and Current Value. With a sound touching on classic techstep and neurofunk, Dauntless recently dropped his Muzzle EP on Commercial Suicide with fantastic response.

The releases haven’t stopped, and now as part of the Dispatch Recordings release roster, we launch the fresh NO FEAR EP.
He has very quickly emerged and established himself on the scene, with a penchant for stone cold beats and gnarly low end synthesis.
Comprised of four tracks (two solo, two with Sach in collab), Dauntless pays homage to the early 2000s tech sound, with a refreshed delivery primed for the current day; with tightly constructed drums and a graceful control over anarchic frequencies.

Come support one of our very own producers making his mark on the Drum and Bass world.

https://www.facebook.com/dauntlessDNB
https://soundcloud.com/dauntlessdnb
https://www.dispatchrecordings.com/product/disltd027-dauntless-no-escape-ep/
★ VERTIGO ★
A key part of the Sydney Drum and Bass scene over the last decade, Vertigo needs no real introduction. The long list of acts he has supported over the years speaks volumes.
Andy C, Break, Survival, Chase and Status, Klute, Alix Perez, Nymfo, Futurebound, State Of Mind, Higher Contrast…
Just naming a few gives you a pretty good idea.
With exposure from the likes of Ram and Good Looking Records, Tom Vertigo began slinging demos across town and before long he found himself carving a spot within the scene on lineups for the likes of Bass Drop and Chinese Laundry stating influence from Drum and Bass heavyweights old and new such as LTJ Bukem, Spectrasoul, Icicle, Bad Company and Ed Rush and Optical.
Bringing the sounds of liquid, rollers and the deeper end of the spectrum, it was a no brainer having Vertigo join us.

★ ELLA LIONS ★
Introducing Ella Lions.
The last two years Sydney has had the pleasure of getting to know this fresh blood in Sydney Drum and Bass having found herself on a long list of events including our own RIOT CLUB nights.

A distinct love for deep rollers and sounds for the steppers, Ella has built a reputation for quality sets with versatility being a key factor in her ability to cater for the crowd she’s playing to. Playing for crews across Sydney she has supported the likes of Amoss, Hamilton, Arkaik, Dlr, Loadstar, Fourward as well as being part of huge lineups such as Psyfari, Hospitality and the Andy C Garden Party.

More recently she’s taken a step back dedicating time to work on her own music as the next step, Riot Club are proud to have one of our main players returning for this night.

https://www.facebook.com/Ellagatordnb
https://soundcloud.com/ellagator
★ ANG LEON ★
This last year has been quite big for the one known as ‘The Lion’.
A fresh face within the scene, Ang Leon has taken steps proving himself with quality sets each and everytime. Deep vibes, Half time, Rollers through to neurofunk he has represented the dark and edgy sounds of Drum and Bass lending himself to become a regular of late. A true component of our local outdoor and Doof community, Ang Leon has more recently begun making his mark as the Drum and Bass cross over continues with inclusions for outfoor events suc h as Dragon Dreaming, Subsonic and notably a massive set at the recent Psyfari on support with the likes of Icicle and Dispatch’s very own Safire (Melb).

One of our personal favourites for ‘riot music’, we had to have him on board for this no doubt. One to watch…

Having first grabbed the mic back in 2006, he first started on lineups across Sydney before a move to Vancouver Canada. It was here alongside fellow expat Mechwarrior and Barry Danga that they kick started ‘Fractured Technique’. A lack of the dark techy side of Dnb in Vancouver inspired them to begin the crew based on the ethos ‘if you want something done properly do it yourself’.

Their string of nights played a role in pushing the deeper tech side of dnb in Vancouver taking on some of the best, touring the likes of dBridge, Digital, Kryptic Minds as well as Ant TC1 himself.

Drawing influence from MC’s such as DRS, SP:MC and Fokus, his own work has included hosting for acts such as Loxy at Renegade Hardware and Skeptical and Icicle at Outlook Festival Croatia.

More recently he has turned his main focus on production under the name Suffer. With inspiration from Dispatch artists such as Scar, Skeptical, DBR UK, Alix Perez, DLR, and of course Ant TC1, keep an eye out for his forthcoming EP on DJ Inks Label architecture its called ‘Roof Knock EP’ alongside Jesta.
Very proud to have Element on for hosting duties.