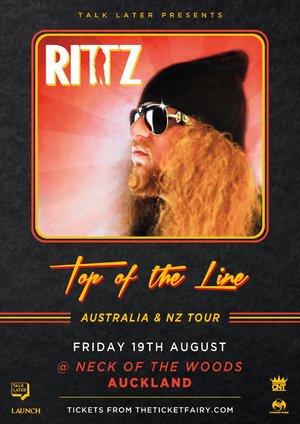 We at Talk Later strive to bring legendary acts from all around the world to little ol' Aotearoa; Rittz is no exception. Hailing from the infamous Tech N9ne's Strange Music label, Rittz is one of the most uniquely talented MC's on the scene. His skills are extraordinary; his style is unmatched, he will certainly set the stage alight come August. If you don't know, now you know. We can't wait to host Rittz here in New Zealand, and we hope the fans are just as excited as we are. Don't miss this one.

Very LIMITED $49.90 + bf tickets will be available from www.theticketfairy.com

Talk Later
Neck of the Woods