The Civic Underground , Sydney [All Ages] 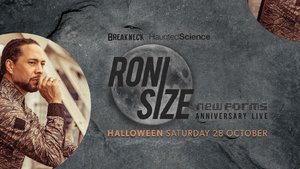 One of the definitive electronic albums of the 90s, New Forms brought drum and bass into the mainstream. Fighting off industry heavyweights including the Spice Girls, The Prodigy, Suede, Radiohead, Primal Scream and The Chemical Brothers, Roni Size & Reprazent won the 1997 Mercury Music Prize, going on to sell 300,000 units in the UK with its release on BBC Radio 1 DJ Gilles Peterson’s Talkin’ Loud records.