RUMBLE IN THE JUNGLE - AKL Heat 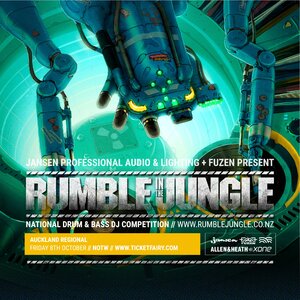 The country’s finest up and coming drum and bass DJs are currently preparing themselves for all out sonic warfare and are set to unleash across 3 regional heats to decide who will advance to Christchurch to battle for supremacy at the National final in October.
Armed with their weapons of choice, razor sharp breakbeats and heavyweight basslines this contest is not one for the faint of the heart. Killer combos, tricks, double drops, next level selections all amount to high energy bass charged mayhem. In the heat of the battle the competition is fierce and only the very best will stand a chance of clashing for the most coveted crown in New Zealand drum & bass and walking away as champion.

Rumble in the Jungle is a DJ competition that focuses on the Drum and Bass and Jungle genre being mixed in a club environment. The aims behind the competition are to bring bedroom DJs with unseen talent to the attention of the club going public and promoters, while at the same time providing a reason for those DJs to up their skill level and try something new.
Rumble in the Jungle is now in its 14th year running, and the event is more popular than ever. With 3 full length mix CDs under the brand released, and competing DJs experiencing success inside and outside New Zealand, the event is now recognized as one of the institutions of the electronic music movement in New Zealand.
Each year the competition gets more technical, exciting and fierce – are you ready to rumble?
Rumble in the Jungle 2021 could not happen without the support of it's sponsors and the great prizes they offer.
Thanks to Jansen Pro Audio, Allen & Heath, Northern Bass, and King Apparel
2021 Rumble in the Jungle Champion wins:
• Allen & Heath Xone Professional DJ Mixer
• Set at this years Northern Bass Festival
Runner Up wins:
Headphones from Audio Technica
Clothing pack from King ApparelR18