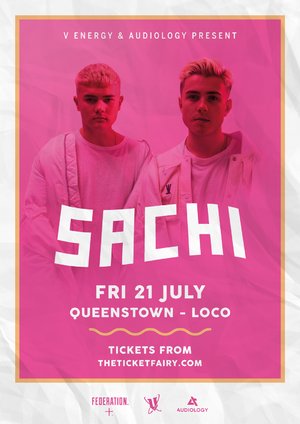 After a short break between hits that were soaked up by ears across the globe, SACHI return with brand new single ‘Shelter’ feat. Nïka. With world-first plays from Zane Lowe, Diplo, What So Not andmore, their debut EP ‘Lunch with Bianca’ also saw them nominated for VNZMA Break Through Artist of the Year, performances at Rhythm & Vines and Rhythm & Alps, and the #1 song on George FM’s 500 Biggest Bangers Countdown. Poised to continue the wave of success that SACHI have quicklyamassed, their new track is an anthemic dance ode to young love.

Featuring the silky vocals of Nïka (younger sister of Broods duo), she effortlessly captivates throughout, production wrapping around her vocals with lush sound-scapes and punch.

Having just returned from a US writing trip working with major labels and publishers, ‘Shelter’ lands (via an April 27 MTV Australia/New Zealand online premiere) as SACHI embark on an Australian tourwith Running Touch. They will also play at Groovin The Moo Festival on April 29th alongside Snakehips, Dillon Francis, and Hayden James.

‘Shelter’ is the start of the next project for SACHI to follow up their first EP ‘Lunch with Bianca’, which will have a full release in 2017 with the generous support of NZ on Air. Be prepared to hear and see a lot more from SACHI this year.