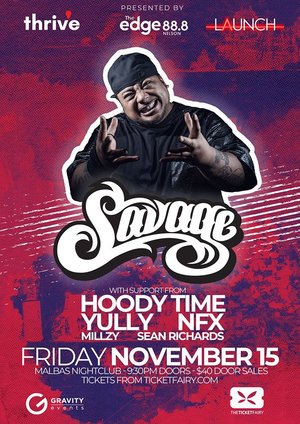 Nelson, we're back and we're putting in the big rig for this one! Nelson's very own Seismic Sound-System huge thanks to the boys. PS THE EVEN BIGGER RIG!

Massive thanks to Redbull for the support

With an appetite for success bigger than a rampaging Godzilla, Savage is breaking all the dance music rules. Who else dominated the airwaves and hung two quadruple platinum selling singles plaques on their wall in 2014 and a New Zealand Music Award for highest selling single in 2015?

The five times Platinum Freaks is the bonafied global bounce anthem. It was #3 in ARIA Singles Chart Australia, #11 Single in France, #9 Sweden, has amassed 70+ million views online and reached #22 on the Global Shazam chart. And with 16 licensing partners for Freaks globally, including signing with Republic for the USA, the international rampage of Savage is just starting.

It's no secret that Savage is multi genre artist, having sold in excess of 2 million records as a hip hop artist, but it was his breakthrough into the global dance realm that championed his third #1 single and turned the local hero into a dominating success worldwide. His new hybrid of bounce, trap and bigroom EDM has relished at the core of the international dance scene, garnering the support of Hardwell, Skrillex, W&W, TJR, VINAI, Bingo Players, Baauer and more of dance music's elite.
TopInfluencers