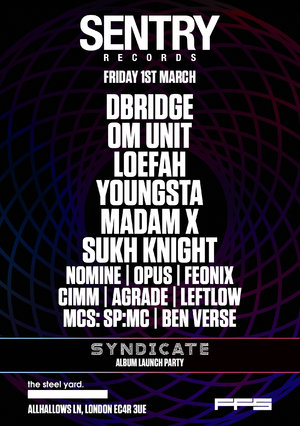 We’re having a launch party to celebrate the forthcoming V/A album “Syndicate” at London’s steel yard on March 1st. Featuring artists from the album and imprint + special guests TBA!

Marking the upcoming V/A album ‘Syndicate’ on prolific dubstep label Sentry Records, a myriad of artists from imprint and the release itself head up London’s Steelyard on 1st March.

Billed for an exclusive 140 BPM set, D-Bridge brings his distinct sound to the caverns of Room 1. Having made a significant mark on the sound of UK bass music, Loefah joins D-Bridge and Youngsta to celebrate the launch with a blend of established and up-and-coming talent from the UK to deliver syncopated sets across both rooms.

Expect the lines to be blurred between bass, dubstep and more all night.

Tickets are non-refundable and non-transferable