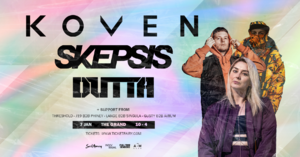 SailAway, in association with;
Full Time Senders, Individual Events and The AM Club

Where: The Grand
When: Friday 7th January, doors open at 10pm

About the artists:
KOVEN: One of the most unique and exciting bass music outfits to emerge in recent times, Koven is the production alias of producer Max Rowat and fronted by DJ / Vocalist Katie ‘Koven’ Boyle. Spotted as one of the pioneering artists to back cinematic bass music Koven have been collating millions of online streams as well as a string of high profile music placements in; Film / TV / Advertising and Games.

SKEPSIS: South London based producer and DJ Skepsis is no stranger to any fan of the UK bass sound. Coming to public attention with a series of heavyweight originals and remixes, his gritty basslines and intricate rhythms have gained him support from both fans and acclaimed artists alike all over the world. Fast forward to the current day, and the 21-year-old Londoner’s meteoric rise shows no sign of slowing. A regular on the club circuit, armed with tunes and mixing skills which never fail to cause carnage in any venue, Skepsis is truly cementing himself as one of the biggest young talents in the scene.

DUTTA: Straight from Manchester, Dutta has landed and is ready to take over New Zealand. Head honcho of the label Informal, and known for huge releases on Souped Up as well as his recent number on Hospital Records, he's prepared to bring the heat to the Windy Capital, and is ready to make the ground crumble armed with his huge tunes.

To support these acts, we are bringing in Audio Avenue's trademark premium tier sound and an insane lighting set up courtesy of Illumination Optics. This will be one of the largest events to hit Wellington this summer, bringing the indoor mini-fest vibes. A rare chance to see three of the best bass-music artists in one show, this will be the night you wished you'd had on New Years Eve.

Get your ticket now and don't miss out!