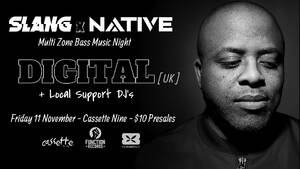 Sub frequencies run through Stephen Carr's veins. Breakbeats roll out every time he cracks his knuckles. Cut him in half, you'll find cables, crossovers, amplifiers and loudspeakers. He has more speakers than you have shoes. He tests his productions on his own Void Acoustic sound system. Most importantly, he has a sound and style that is unmistakable to him. A sound which has had an incredible influence on the genre known as drum and bass & jungle.

Digital has been a prominent force since 1995. Pick an era in drum and bass, and his signature boot stamp is dented deep into it. From creating some of the most seminal soundtracks for Goldie's legendary Blue Note Sunday Sessions, he's one of the first jungle artists to explore the now prevalent halftime style.

Digital's unmistakable sonic signature rumbles through the movement with consistency and clarity. His diverse and dub-inspired productions can be found on the genre's most defining labels such as 31 Records, Certificate 18, Metalheadz, V, Reinforced, Violence, Rupture, Exit, Commercial Suicide, C.I.A., Photek Productions, Lion Dub International, Chronic, Ingredients and many more.

With well over 130 productions to his name, it would be madness to start highlighting how many Digital releases have changed the game. His first solo release, 'Spacefunk' got played by D.J.s including Goldie, Kemistry & Storm, Grooverider and Fabio for seven years solid. With groundbreaking pieces such as 'Deadline' (one of the first-ever halftime tunes), 'Waterhouse Dub' and 'Phantom Force' (with longstanding comrade Spirit R.I.P.) Digital's raw, rolling, roots-founded sound has been a staple source for selectors from all corners to this day.

Take his label L Plates, an imprint that gave the world Amit and Baron. And Phantom Audio, (his collaborative label with Spirit), which rolled out a slew of scene-reviving against-the-trend tracks throughout the early 2000s. Along with the ever-prolific Function Records imprint (accelerating yearly with events and releases), are also his five notable artist albums.

In 2016, 'C.I.A. v Phantom Audio' was created solely for collaborations by Total Science, Digital and Spirit. 'Rumble' is the most popular track from the three releases, and is still actively played out by legends like Dj Storm, Randall, Fabio, and Grooverider. Not slowing down in 2017, this prolific producer released two E.P.s on Function and a 12" on Metalheadz, Nomine Sound and Commercial Suicide. Inspired by dub, he brought tracks like 'Water Bucket,' 'Strictly DnB,' and 'Time Out' to the foreground.

Digital's 2016' release 'Synthesis' is a collaboration album where he skewed the spotlight on a rollcall of his favourite peers. This paved the way to his 2018 release, 'Total Control,' L.P. which has been received as one of his rawest honest and heavy-hitting bodies of work to date. Take it or leave it… Digital has always done things on his own terms, creating and evolving his own sound. 'Total Control' is a strident reminder of where he's come from, where he's heading and where he'll always be: deep in the dance. No tunes for trend's sake or profile pandering. Stephen Carr tailors breakbeats strictly for big systems and full immersion trips where subs run deep through the dancefloor's veins. An influential craftsman; 25 years deep, Digital remains one of the most respected and renowned forces in Jungle and Drum and Bass.

In between a myriad of projects like the November 2019 release of 'Function Records 50'–Shadows,' (the long-awaited 12-track compilation to celebrate the label's 50th release), he keeps his edge sharp DJ'ing throughout the U.K., Europe, Asia, New Zealand and North America.

2020 see 25 Years Of Digital; also, he is currently studying a masters degree in Audio Production at the University of Westminster.