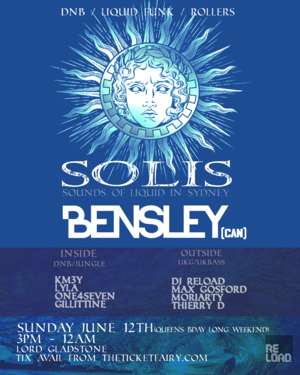 TopInfluencers
Solis return's again this time with a very special guest
BENSLEY (can)
Classic solis sounds, groovy smooth liquid and dancefloor vibes all provided
on the Particle Sound System with extra subs to give u them good feels!
happy hour cocktails, 2 rooms of DnB / Ukg  BBQ smoke friendly courtyard and wikkid tunes all day!
Reload Bass brings together all crews from Sydney, to enjoy a new monthly Sunday session and BBQ all LIQUID DnB and ROLLERS and Dancefloor rollers all day and night!
With it being the Queens Bday its a public holiday so its sure to be a big one!
check some of the reviews
- "Thank you for putting on such a great event, yesterday was incredible "
- "Big thanks everyone! Had a great time people/tunes/food/drinks all darn good "
- "Such good vibes, So many mega babes, thanks ! "
For lovers of Drum N bass this is the Sunday sesh you've been waiting for!
BENSLEY
Toronto-bornBensleyis fastcementing his status as one of Canada’s most exciting young producers. Armed with impressive production knowledge and a proven track record in dancemusic,Bensley has carved out a signature sound that brims with influences spanning many different genres. With its impactful nature and bass-heavy undertones, Bensley’s musics creams dancefloor appeal; all while retaining an intricate musicality that all electronic musicfans will admire. Bensley has solidified his success in recent years with an impressive catalogue of releases, boasting over 15 million streams on Spotify alone.Top dance labels RAM Records, Monstercat, Deadbeats, mau5trapand UKFare all home to Bensley’s music–with further releases on more top tier labels to be announcedfor 2021.Bensley’s most impactful releases include “Roll The Dice”, “Leaving / Debonair” “That Feeling”, “All Night”, “Vex”, “Fandango”,“One Last Chance” and 2019 album “Muskoka”, alongside remixes for Zeds Dead, FluxPavilion, Camo & Krooked and Delta Heavy. After signing his first record deal aged19,Bensley exploded on to the scene with debut album “Next Generation”. The album’s success kick-started an illustrious career in dance music, making Bensley a sought-after live act and earning him the close attention of his peers. Bensley’s music has consistently accrued support from some of dance music’s top tastemakers–including Zeds Dead, deadmau5, Dillon Francis, Andy C, NGHTMRE & SLANDER, Zane Lowe, Netsky, Jauz, Noisia, Friction, Sub Focus and many more. As a touring DJ, Bensley has headlined shows across Europe, Australia, New Zealand, SouthAfrica and Canada, as well as performedat world-renowned festivals like Tomorrowland and Let It Roll. His high-energy sets have allowed Bensley to become a commended act in the live circuit, as he continues to impress fans and cultivate a loyalfan base worldwide.
WE GOT SMOKED JERK CHICKEN / PORK AND VEGETERIAN ROLLS ON THE MENU!!!
Limited Capacity
Ticketed event
tix on sale now!
SELECTAHS :
INSIDE
[DNB]
BENSLEY (CAN)
LYLA
KM3Y
ONE4SEVEN
GILLITTINE
OUTSIDE
[UKG/UKBASS/HIPHOP]
DJ RELOAD
MAX GOSFORD
MORIARTY
THIERRY D
All going down at
GLADSTONE HOTEL
115 REGENT ST CHIPPENDALE
18+
3PM - 12AM
SUNDAY JUNE 12TH