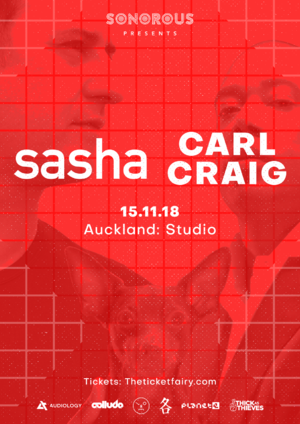 As we start to set our sights on the return of Sonorous Festival 2019 and of course summer, we thought it would be necessary to refresh everyone's memory with a festival teaser, a one off exclusive club event with two originators from both sides of the spectrum of House music.

Sasha has a long history over the years of visiting our shores & vaporising sold-out dance-floors, starting back in 97 @ The Staircase (now known as Studio), and most recently back in 2014, to be able to add the legendary Detroit Techno icon that is Carl Craig to the mix is an honour.

Grab those close to you, pencil in the date (27.01.19), standby for a Sonorous festival 1st lineup announcement so good that it'll cement this in your diary for good.

If there are boundaries yet to be broken, then you can bet that Sasha has got them in the crosshairs. He's been battering them down since Shelley's, The Hacienda, Renaissance and Twilo; from Airdrawndagger to Invol3r. Since 2011, he's carved a new way with his increasingly pivotal Last Night On Earth imprint, the label that has introduced into its family fiercely forward-thinking producers like My Favourite Robot's James Teej, Simon Baker, ThermalBear, Ejeca, Ghosting Season, Max Cooper and Knox.

Then there was the arrival of the long-awaited third album in his 'Involver' series in 2013, the intricate and challenging 'Involv3r'. It combined on one disc Sasha's peerless command of dance floor sensibilities and on the other his skilful exploration of beatless soundscapes, featuring his exclusive interpretations of tracks from The xx, Blondes, Little Dragon, Benjamin Damage, Foals and ThermalBear. It also featured 'Shoot You Down', his own spine-chilling anthem with vocals from the beguiling Swedish chanteuse Kicki Halmos.

Boundaries out of the studio have been equally unsafe. Taking over with his Last Night on Earth parties around the globe, Sasha has brought nothing but the finest line-ups to clubbers around the world. Last summer he hit the world-renowned Space Ibiza with a monthly LNOE residency, which showcased the likes of Scuba, Catz & Dogz, Heidi, Magda and of course Sasha himself. He also hosted his first festival arena with Last Night on Earth at SW4 in the capital earlier this year.

It doesn’t stop here though. 2015 will see Sasha taking things to another level on and off the dance floor. Expect big things from his parties around the world, which he is running alongside his imprint label Last Night on Earth. In his own words, Sasha says, “We have some really exciting things planned for 2015, some great releases and I will be collaborating with some of the very talented artists we have championed".

Carl Craig:
Carl Craig is described as a creative visionary, an electronic music icon, an esteemed Grammy-nominated composer, a world-class DJ and an ambassador for his native Detroit.

Yet the common thread that runs through Craig’s broad musical canon and creative projects is a resounding fascination with futurism. The prolific producer has cultivated a unique path as an artist, entrepreneur and civic leader, guided by his tendency toward forward thinking.

“My livelihood is making music that I can perform, whether I’m doing orchestral production or modular strangeness or generating club music. I don’t restrict myself,” said Craig. “I defined myself by being who I am. The ultimate self respect is when you say you’re going to do something and you go and do it to the best of your ability.”

Craig released his first track in 1989 on a Virgin UK compilation album, two singles followed on labels run by his first collaborator, Derrick May. After a series of ambitious releases for his co-owned Retroactive imprint, in 1991 Craig launched his record label Planet E, with the groundbreaking EP “4 Jazz Funk Classics”, under his alias 69.

Planet E turned 20 in 2011 and Craig celebrated the label’s history by taking Planet-E and its artists and collaborators on a world tour for the first time in the label’s history. As well as this, Planet E invited friends of the label – including Luciano, Kirk Degiorgio, Loco Dice and more – to pick their favorite Planet E track to remix and re-release. Reflecting a year that was packed with events and releases, Craig readily admits that when he started the label he was hoping “it would last forever.” He cites artistic freedom as the highlight of running the label and adds, “It was never a struggle for the label to be an outlet for my or other people’s music. It was always a struggle to stay in business, actually a war to stay in business.”

Looking back now to Craig’s early releases from 1989-1992, one can see how much the wild variety found in his early music set the groundwork for his diverse career. He’s fortunate to serve as an inspiration and influence to countless artists in the underground electronic music scene, as well as crossover acts like Caribou, Underworld, Hot Chip and LCD Soundsystem.

A massive thanks to...
Sonorous
Thick as Thieves
Tigerstyle Agency
Audiology
Collude