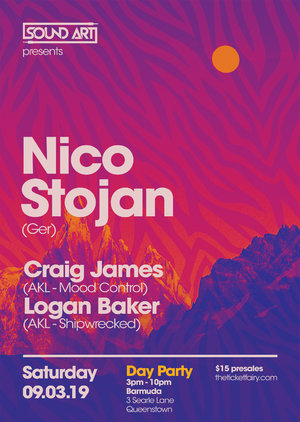 Following on from a successful night with Clive Henry, Sound Art is back with its next instalment of epicness, an outdoor Day Party.

Nico Stojan - Berlin, Germany.
Berlin native, Nico Stojan, has been all across the planet taking people on musical journeys since the early nineties.
He developed a deep love for Jazz & Hip Hop before the vibrant growth of the famous Berlin electronic nightlife.
Once the Berlin scene took flight, Nico was expressing himself with euphoric sets as a resident at Bar25.
It didn’t stop there. Since then his sound has been welcomed by seas of desert dancers, festivals of warm hearts & clubs of ecstatic ravers.
Nico’s productions find the perfect harmony between analogue & digital sounds, irresistible grooves accompanied by entrancing melodies.
As a co-founder of Ouïe records, together with Acid Pauli, Nico is planning to produce more showcases and present his vision of modern dance music around the globe.

Logan Baker
A man of many talents and creations in the music scene.
Owner and creator of Silent Studios Warehouse in Auckland as well as Festival owner of Friends From Around The World and Co-owner of Shipwrecked Festival NZ. Logan has been running events and DJing over 15 years now.
His sets are filled with bottom heavy basslines with a super funk flavour. Get in to check him out.

One half of Auckland hottest Techno Live Act Mood Control, Craig James is a driven, passionate and charismatic DJ with a unique approach to his blend of sound.

On the scene since 2007, Craig had the chance to perform throughout major cities across the world, including London, Amsterdam, Rotterdam, Melbourne, Berlin, Kuala Lumpur, among others.

Whether he is performing in front of thousands of people or to a smaller crowd, Craig always strives to arrange his playlists as a true musical journey, engaging the crowd on a whole new level. His performances are always high energy and as soon as you hear that first track drop you know you're in for a ride.