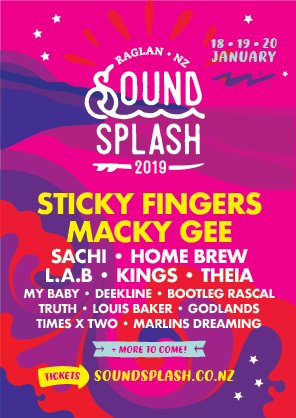 Presented by ZM, the festival includes international big hitters Sticky Fingers and Macky Gee, alongside some of the most exciting Kiwi acts making waves across the globe, including SACHI, Theia, Louis Baker and Marlin’s Dreaming.

Tickets go on sale at 7.00pm Wednesday August 8 from www.soundsplash.co.nz, but you can register for earlybird tickets: https://arep.co/p/ss-2019-presale

Respected and renowned for its focus on the environment and also its reputation as being a festival run by music lovers, for music lovers, Soundsplash covers all bases when it comes to genre, with organisers curating an exciting line-up with acts from all over the world.

They include Aussie "band of the moment" Sticky Fingers, who have just finished a world tour, selling out across Europe, the US, Australia and here in New Zealand.

Another major drawcard is British DJ/producing legend Macky Gee, who is returning to Kiwi shores after creating a frenzy earlier this year when his first-ever NZ show sold out in three minutes flat.

Other international acts joining the line-up include Deekline, Bootleg Rascal, Godlands, and My Baby.

There’s also strong representation from New Zealand. They include the Diplo-approved dance duo SACHI, who have just released a new track ‘Hollywood Angel’, feat. East, and signed a deal with US label, Casablanca Records.

Alt-pop sensation Theia is also in the mix. She continues to turn heads on the international stage with Clash Magazine recently describing her new single ‘Bad Idea’ as “expertly controlled pop bedlam, laced with colour and energy”.

Multiple Silver Scroll nominee, Louis Baker, promises to bring an exciting live show to Soundsplash. Baker has performed at some of the world’s biggest festivals, including Field Days, Sonar Festival, Berlin Festival, The Great Escape, and Splendor in the Grass.

The indie, psychedelic, surf rockers everyone - including Pigeons and Planes - is talking about, Marlin’s Dreaming, is also a ‘must see’.

Kings, who holds the NZ record for longest #1 song in the NZ charts with ‘Don’t Worry ‘Bout It’ and continues to bring the high energy dance hits, will get the crowd moving.

And, what would a festival be without the incredible Kora brothers - aka L.A.B - who are well-known for their live performances.

With its stunning location, just 500 metres from the beach and a short drive from the Raglan township and some of the world’s most famous surfing spots, Soundsplash is understandably one of New Zealand’s most popular summer festivals.

Held across three days, and three stages, organisers are also going the extra mile in 2019 to ensure production levels are top notch. Also notable, is the festival’s ongoing commitment to its Zero Waste policy. And in 2019, Soundsplash will proudly be the first-ever accredited "plastic bag free" festival in New Zealand.

It all makes for a fun-filled, community-minded event, which focuses on all ages and also families, with lots of healthy food options, camping with hot showers, and workshops, which offer everything from arts and dance, to nutrition, health, yoga and education around teen suicide, depression and anxiety.

Can I change campsite?

It is not possible to change campsite.