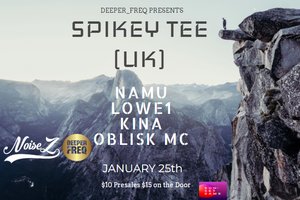 Spikey is truely an original rude boy. Being a Sound System Selector/Operator for Soundclashes in and around London from age 13. Spinning and recording tunes for over 30 years, Spikey is a true pioneer of many urban sounds from their inception, such as UK Hip Hop, where he was one of the founding members of The Sindecut. Later joining Jah Wobble's Invaders Of The Heart as lead vocalist and recording with such legends as Bomb The Bass, Morcheeba & Mr Scruff to name a few.

His work with many legends of Jungle & early Drum and Bass, as a vocalist, producer and M.C. has allowed him to see the genre blow up in the late 90's/early 2000's and ebb over several years until the recent surge in Jungle/Drum & Bass worldwide. He has worked with the most influential labels within this scene, such as Congo Natty, True Playaz, Playsides, Fokuz Recordings, Resin Records, Conscious Rebel, Detail Recordings, Big Dada Recordings, Wicked Jungle Records & more! He has also collaborated with many New Zealand artists, such as Agent Alvin, Olie Bassweight, Getafix & Timmy Schumacher amongst others.

For the first time in his career Spikey has embarked on his first full length album which is designed to exemplify the trials and tribulations of his musical journey. Packed with larger than life vibrations and positivity, his long awaited new solo album Between Wake & Sleep is due to release in late 2019 on Tokyo Dawn Records.