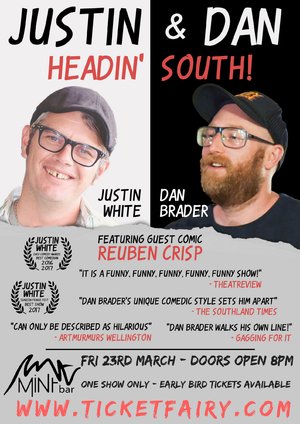 Two of the South Island's veteran comedians hit the road and are headin' to Wanaka, fresh from a few shows at the Dunedin Fringe festival! Anyway here's a little bit about the two comics!

Dan Brader
Dan Brader has been doing comedy since 2007 all over Australia and his native home of New Zealand. He was a regular fixture in the competitive Melbourne and Perth comedy scenes where he also ran a number of comedy rooms himself. In between sojourns to Australia, he's been performing regularly in the Dunedin comedy scene as a headline act since 2010.

His solo show Horrible, Horrible Human Being, which he toured throughout New Zealand, was a sell out in Dunedin and further cemented his reputation as a cult favourite here. Brader has also performed his unique brand of acidic, unashamedly brutal observational comedy and freewheeling storytelling in solo shows in festivals such as the Melbourne Fringe Festival, the Melbourne International Comedy Festival and Perth's Fringeworld. He has also performed at the Dunedin Fringe Festival twice before in group shows. This will be his first solo show at the Dunedin Fringe Festival.

Here's what the critics have to say:
"Brader is a comic you will love or hate, but he's never dull." - New Zealand Theatre Review

"Known for his morally-questionable storytelling, Dan has a way of making your own wild stories seem tame by comparison!" - Busselton Dunsborough Mail

"In a comedy world that can be a bit ‘same-y’, Dan Brader dares to be different." - ArtsHub

"He walks his own line and drags the laughs out of it with a sharp shake." - Gagging For It

Justin White
He hates it when people bring it up, but Justin "Rusty" White is a critically acclaimed, multi award winning comedian. Who wouldn't be embarrassed by descriptions of his "virtually uninterrupted hour of laughter" show I Learnt Something Once like "a gem of a show", or the somewhat OTT "finely polished masterwork" (Theatreview).

How would you like being described as "can only be described as hilarious" (ArtMurmurs Wgtn). How would you recover from being "undoubtedly the highlight of the night" (Caclin magazine) then going on to win Best Comedian (2016 Chch Comedy Awards)? All right, we get it! Jeez. Rusty wishes people would stop going on about it…

Both Justin and Dan will be joined by up and coming new Dunedin comedians Reuben Crisp and Annie Hayes fresh from their debut Dunedin Fringe Festival show!