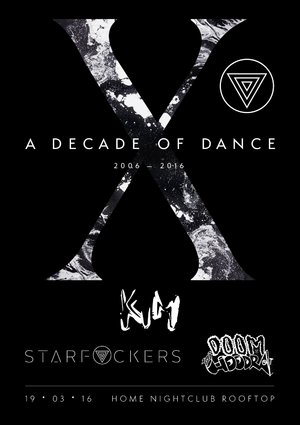 Trancending space and time, the journey of the three triangles, now spanning a decade - in the most important era of electronic music history - has finally received it’s own order of magnitude.

The ten points of the Tetractys, have finally formed in triangular fashion, securing Starfvckers its place nestled deep in the lush garden of music history.

As the wheel turns, it provides fortune and gives rise to a new cycle. To celebrate and relive past glories, the two sons of the triangles - Starfvckers - return bathed in the full majesty of grandeur, and interlaced with Australian Dance music royalty K.I.M, and Doom & Hoodrat, rebirthing to where the first days of this epic crusade once began.

With a world of experience under his belt, The Presets’ beat architect “K.I.M.” is widely regarded as Australian Dance Music royalty. With more notches on his musical bedpost than Ron Jeremy, few producers and musicians can boast the extensive achievements and accolades received by this industry titan. Delving into the realms of a techno infused trance, KIM will take you where you’re going, and perhaps, where you’ve never been before.

The Starfvckers Supernova shakes the surrounding universe with an explosion of colour and light - revealing at it’s core - the two bright sons, and the dawn of a new era. Starfvckers is finally back, and armed with the wealth of an epic history in an explosive new age, the prolific percolation of this debaucherous duo has finally reached its boiling point.

The boys behind the infamous Bang Gang return to Starfvckers, after many years, to relive the glory days and get stuck into some dance floor K-Lassics. It’s rare to find these boys on a bill these days, but they’ve done us the honour of gracing the Starfvckers DJ booth for this momentous occasion.

The decagonal dance opens its doors at 9pm of the 19th March.