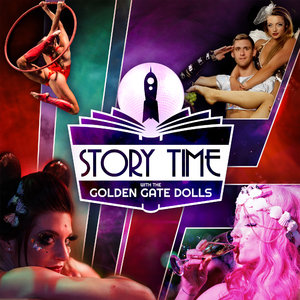 Story Time with the Golden Gate Dolls is a gourmet experience of decadent proportions with plenty of circus tricks, aerial artistry and theatrical shenanigans to dazzle and delight. Our dinner meets circus meets nightclub brings the mystery of masterpiece theatre and the allure of the Golden Gate Dolls, putting it all on the table.

Vol. 1, September 20th, brings outer space close to home. Golden Gate Dolls blast off with an interstellar tale of love, enchantment, and redemption. Private Chef Lee Cecchi offers up fresh, modern, and flavorful delicacies to feast upon while you rocket through the cosmos. Expect this four course dinner show to tantalize your tongue and thrill your senses. Come get elevated with us.

Somewhere, something incredible is waiting to be known. -carl sagan

Masterpiece theater at his finest, our guide into the world of Story Time.

Michael has been performing since the age of 5. He is most well known as emcee child in the underground dance music scene. Michael made a return to acting with the web comedy series The Van Life and upcoming dramatic roles in the films, Fringe of Existence, Redress and the action series Afterwards. You can find him performing most often with the drum and bass group, Bachelors of Science.

Bored with heaven and looking for hell, she’ll guide you but it may not be where you want to go.

Stephanie discovered her love for aerial arts thanks to an early start at competitive rope climbing on a sailing team based in San Francisco. She joined City Circus at the age of 15 to pursue the love of flight where they taught her corde, silks, and ignited her circus fire. Stephanie performs professionally with the Golden Gate Dolls and can be found dazzling the SF nightlife scene at The Great Northern. She is head of the aerial department at Free Flow Academy of Hybrid Arts and is passionate about sharing the best workout on the planet to beat all the boys at arm wrestling.

A man out of time. Searching his way through the stars. Looking for a home.

Micah brings a tantalizing mix of flexibility, strength and physical prowess to the stage that is a rare breed of performer. You can find him wowing audiences both in the air and on the ground. He is an accomplished dancer and aerialist; a performance with Micah is not to be missed.

There has always been something real strange about that girl…

Chloe Marvel Light Axelrod is a powerhouse performance artist whose talents have carried her around the world. Chloe has performed for a variety of acclaimed companies in world-class productions in places such as San Francisco, Tokyo, Osaka, Atlantic City, Leipzig, as well as in the Dominican Republic. Chloe is known for her dynamic performance style, full of high-level acrobatic and aerial skills combined with effortless grace and incredible form.

She was aphrodite incarnate, perfection with an edge. It was her eyes that could possess you, just a look…

Dwoira Galilea grew up in Coney Island, NYC, where she trained rhythmic gymnastics from age 9-13. She began circus/theatre/dance/vocal training at age 11. She moved to San Francisco after graduating from the Performing Arts High School of NYC as a theatre major, and specializes in contortion, aerial hoop and tissu. Her strength and flexibility has brought her to perform internationally with traditional and contemporary circus settings (including Cirque Estival, Cirque Mondo, Circus Bella, the Vau de Vire Society, Celebrity Cruises, Circus Hamid, Fantazia Circus, Chicago Contemporary Circus Festival, Smithsonian Circus Festival). Currently Golden Gate Dolls bendiest bombshell, you can catch her every weekend in SF.

Enlightened Unconsciousness, a reflection of our wants, needs and desires. Sometimes a crawfish.

As the first born daughter of a convicted bank robber, Bree Rock's appreciation of the dramatic and unusual was cultivated at an early age. This appreciation led her to the theatre and eventually to circus, where the unusual was usual and drama had much higher stakes.

From European Varieties to performing right at home with the Golden Gate Dolls, she both mesmerizes and encourages audiences to delight in the absurd