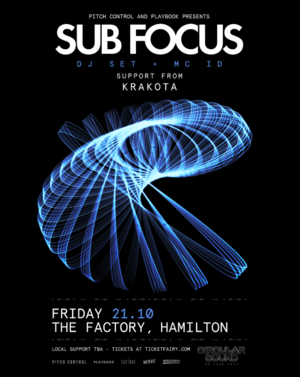 Tickets go on sale this Thursday at 3pm.

One of the leading names in dance music, SUB FOCUS remains an influential figure in the Drum & Bass scene, coming in hot after revealing the first taster of new music to come, ‘It’s Time’ ft. Gene Farris. The single was first premiered at his recent sold-out debut of Circular Sound at Printworks London and the official visual was just released, which will be performed in New Zealand for the first time.

He’s since become an international headline act performing at the likes of Coachella, Glastonbury, Tomorrowland, EDC, Warehouse Project, and having sold out Brixton Academy and Printworks London as a solo act. In 2009 he released his self-titled debut album, his second album Torus in 2013 and joined forces with fellow D&B big hitter Wilkinson on their acclaimed collaborative album Portals in 2020. In 2021, Sub Focus released his debut remix album Reworks I featuring remixes of his originals from Dimension, Culture Shock, Camo & Krooked and more, as well as officially remixing Rag’n’Bone Man, Camelphat and ACRAZE at the start of the year. More new music is due for the end of 2022.

This is a name most drum and bass fans will be familiar with through his steady slew of releases on Hospital Records. Since then he’s released music on UKF & Drum & Bass Arena before signing to long-time friend and star of the scene Wilkinson’s new Sleepless Music. Wilkinson heard something in Krakota’s music and quickly moved to help develop his sound.

This show is presented by Pitch Control, Playbook Agency, Nexus and The WSU.