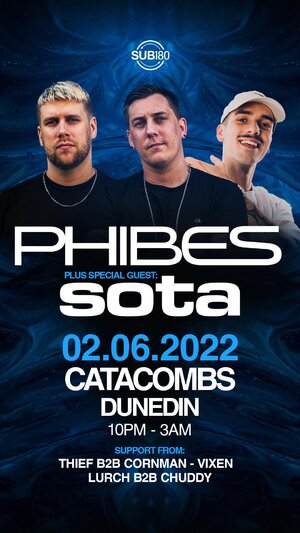 DUNEDIN! We just cannot get enough of you 😤

We are excited to present a huge double international header at our second home Catacombs to kick things off in June!

Before the pandemic hit, the pair were already touring across the globe, from the UK to Germany, from New Zealand and Australia to North America, as well as blowing up high-end festivals like Glastonbury, Boomtown, Beatherder, Shambhala (CAN), NASS and Isle Of Wight. Now that the clubs are open again the boys have capitalised on their incredible Lockdown rise, including a Beatport global (all-genre) No 1 (their seminal remix of Best Assassins' Homegrown on Jungle Cakes) and a newfound position as one of the top-selling acts in DnB (as confirmed by Beatport itself.)

At one point in October 2021, the boys had the top three-selling DNB tracks in the world, an unprecedented achievement. The diary is now looking packed, and 2022 looks set to be the year in which Phibes take things to a whole new level.

After his first release on Low Down Deep in November 19 2019, Sota has released a variety of styles and
flavours, with a main focus of high energy music packaged for the dance floor. With collabs with Logan D,
Turno, and plenty more huge names in the works - he is proving himself to be a household name in the future of
both jump up and drum and bass as a whole. Club hits such as ‘Down’, ‘Frontin’ and ‘Pumpers’ have seen
plays on some of the world’s biggest stages, as well as airtime on BBC Radio 1 and KissFM.

As the potential of the 2021 club season becoming a reality draws closer, Sota is getting ready to unleash a
years worth of aggressive, anthemic and technical drum and bass to crowds worldwide.