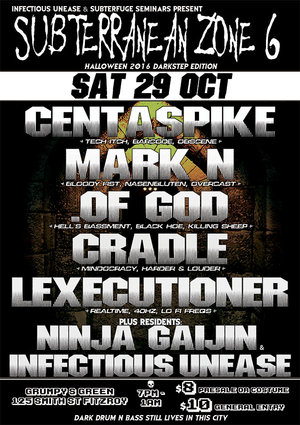 Denizen of Canberra, Australia. A disturbed humanoid who creates dark and brooding electronic music in all shapes and forms but mainly drum & bass. The overall style and feel of these abominations are usually sinister freeforms with a solid emphasis on the deep, dark and powerful unknown forces within the universe. Having supplied weapons to such terror groups as Tech Itch Recordings, Obscene, Barcode, Hell's Basement, Order in Kaos and Tech Cycle, Centaspike has managed to develop a reputation for provding some of the most menacing and hallucinogenic arrangements of sounds known to humankind.

So much can be said for being at the right place at the right time with the right people. Little did Lex suspect that hearing jungle techno one wild night in '94 would forever change the way he was as a human being. The intense beats, menacing sub bass, the vibe, the dance floor, the lasers, the people, the thrill of it all being relatively unexplored and untainted let us dive head first into what some may consider one of the pivotal moments for our generation in that decade - when the rave took hold and showed no signs of letting go. And to think we kept feeding it and kept feeding it!!!!!! Arguably one of the best DJs in Melbourne, the Lexecutioner has consistently been smashing raves, parties and club nights with a range of beat-filled music with a focus on deep, heavy and atmospheric jungle and DNB (among other styles).

Founder of The Grey Sea & Subterfuge Seminars, Ben B. Tanu (Ninja Gaijin) began playing in indie rock, improvised harsh guitar noise & crust-grind bands in 1997. Always passionate about music, Ben has worked in organizing and promoting parties, zine writing, music journalism/photography, hosting community radio shows, coding and maintaining band web-sites, band performances, djing, sound engineering, freestyle/written rapping and Tuvan & Mongolian style throat-singing. In 2005 Ben shifted focus from bands to solo work in electronic productions and dj performance. After various projects, he now finds himself performing under the name 'Ninja Gaijin'. Ben's music attempts to juxtapose and fuse as many eclectic tones and rhythms into as short a space of time as possible, allowing a focus on lack of repetition as well as an aim towards unexpected variations. For Subterrean Zone 6 Ninja will be playing a pure dark jungle, techstep and darkstep/skullstep DJ set.

DJ Infectious Unease has been presenting Infectious Unease Radio and DJing at clubs since 1992. His DJing has ranged from specialist events starting at specialist events starting at Asylum Nightclub, Blue Velvet (Aeon, Belfry, White Room, Revelations, and Enzyme nights), Pony (Dark Fall Ball), Dream (Demus night), Vedette, Cas Reitops (Dirty Secrets), Horse Bazaar (Dawn Industries Enzyme Night), Abode (Neo Etica), Mr Boogie Man Bar (Dawn Industries Enzyme Night), Bodega Bar (Subterranean Zone) The Sub Club (Subterranean Zone) ,Randy Dragon (After Hours) Bar 303 (After Hours) Interzona (Beach on Brunswick). A member of the band Noir Corps, Dawn Industries Music Collective, the label Dawn Industries, Enzyme (live music events), has also released an eclectic and limited edition 4 disc 62 band compilation with his label Infectious Unease Productions and Dawn Industries. A self-published performance writer, who has released such books as 2011“Severed Eye”, 2005 “The Poet's Eye”, 2003 “The Deception Of Latex That Causes The Deepest Remark”, 1997 “The Cadaver Restaurant- A Menu Of Short Stories And Poems”, Works On Cd 2010 “ Noir Corps “le terreur”, 2003 “Reflective Return Spoken Word By Gordon Taylor Music By Ernie O”. He also made a guest appearance in the “Hellfire Nightclub Melbourne” documentary produced by Mark Bakaitis in 2010 discussing the music played over the years at this event. Also perform as Raven Corps Guard in the Film “Cult Girls directed by Mark Bakaitis. DJ Infectious Unease loves to explore a plethora of sound and explode it out on the air waves and night clubs. He has no fear of delivering a sound of surprise. You just never know what he will seduce, tantalise and drive all your five senses with. For this event, Infectious will be playing a techstep and dark dnb DJ set (worth getting down early for!).