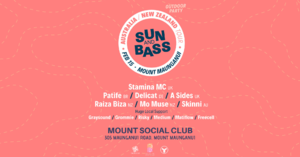 SUN AND BASS FESTIVAL FROM ITALY


SUN AND BASS is a drum and bass festival organised on the beautiful Italian island of Sardinia. Running since 2003, every year for 8 days and nights festival goers and artists from all over the world meet at this incredible location to enjoy great music, sunny beaches and amazing Italian food. What makes SUNANDBASS special is its family feel, friendly vibes and unforgettable moments. Now in 2020 Sun & Bass has launched in Australia and New Zealand.

While we don't have the beach, the feel’s are for real!! Don't miss the first time this event hits our shores.

Stamina MC
Digital Soundboy / rinse.fm
A multi‐talented natural performer, effortlessly combining the roles of vocalist, host and MC with a massive stage‐presence, Stamina’s well earned reputation speaks for itself. He‘s a touring veteran and lives up to his name absolutely, making regular appearances across the globe in Brazil, Australia, New Zealand, USA, Japan, UK, Europe and beyond. Whether alongside Shy FX, DJ Marky, DJ Fu & Jungle Drummer or a whole of top DJs, Stamina’s high energy performances are certain to raise the crowd with an outstanding range of lyrics, harmonies and freestyles to match the occasion. A total professional, his love of music always takes centre stage and shines through whether performing live, on radio or in the studio. Representing on London’s Rinse FM with a weekly show, he’s also a moderator for Drum and Bass Arena’s online forum plus a producer and a DJ in his own right.
Stamina is, by now, no stranger to the stage or to the studio. It was in 2000 when he got his first break, with regular appearances at Bryan G's Movement nights, and in the years since he's played on some of the biggest stages in the world, including Glastonbury, Exit Festival and Skolbeats.
He's also responsible for voicing two tracks that have charted in the UK Top Twenty ('LK' with DJ Marky & XRS, 'Barcelona' with D‐Kay & Epsilon) and has worked with Roni Size ('On & On') and more recently Ill Logic & Raf ('Blood Meridian'). With a wealth of experience and energy to match, he's also fronted live touring shows with London Elektricity Live and Craggz & Parallel Forces. Currently Stamina is performing regularly as MC of choice for both DJ Marky and Shy FX, with further endeavours into the 'live' arena in the shape of 'Jung Fu' (Jungle Drummer vs DJ Fu live).
Stamina has also hosted Rinse FM’s first dedicated drum & bass show since Summer 2008. Broadcast weekly on a Tue night/Wed morning, his show enables him to get back to his lesser‐known roots in DJing ‐ check the archive available here. Stamina is also affiliated with ethical clothing brand, THTC, who have a long tradition of supporting conscious underground artists. For the future, expect more vocal outings in a multitude of genres, production under the long‐dormant alias of 'Armour', and DJ sets.

DJ, Producer and Engineer, Jason Cambridge (aka A Sides) has been producing music since 1990 and has released well over 500 tracks to date across many of the scene’s biggest labels.

Wagner Ribeiro De Souza AKA DJ Patife (the ‘scoundrel’) was born and raised in Brazil's music and clubbing capital São Paulo. He started out as a DJ in a local Hip Hop band, having been influenced by SoundSystem and Hip Hop culture, before falling in love with Jungle andDrum & Bass in the mid-nineties.
A Brazilian Drum & Bass legend, he has played the globe: from WMC(USA), SUNANDBASS (Sardinia), Exit (Serbia),Glastonbury and Womad (UK), Skolbeats (Brazil), Montreux Jazz Festival (Switzerland),to Sonar Festival (Spain).

As a producer, Patife is best known for 'Sambassim', played by Gilles Peterson, Laurent Garnier and Andy C. It also won 'Best Dance Music Video' award at the MTV Video Music Awards in Brazil. But it was his part on the Brasil EP on V recordings, that rubber stamped his arrival. It’s the ability to cross-over genres; from D & B to the jazz scene, that sets him apart.

A resident at many a legendary Drum & Bass clubnight, he’s never been pigeon-holed by his great love for the genreand continues to make noise from WOMAD to Worldwide Festival.